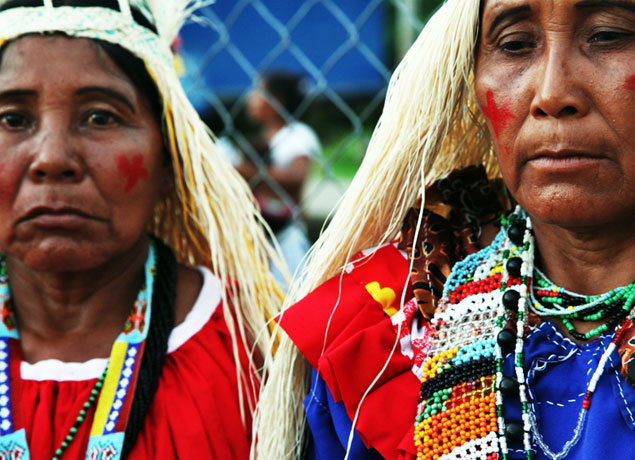 Najanamu — a cry from within

Culture in Venezuela is as fluid and as diverse as its ever-stretching landscape. There exists no single identity, but a series of explorations of heritage and modernity that have come to define a country both proud of its varying folklores as of its sky-scraping bastions of western affluence in its major cities. From the cowboy plains of Los Llanos, with its four string guitar rippling out songs of love and peasant hardship, to its beating drums on the coast echoing tales of slavery and black resistance, to intimidating war chants that form a chorus with the toucans and the monkeys, soundtrack to the Amazon’s ever-continuing epic, to finally the children of the slum’s free styling verses taking over the corners of Caracas. Its relatively fresh constitution of 1998 has finally applauded its multicultural pluri-ethnic identity, and its people are now recognised as what they have always been. This diversity is unifying, as together they mix and melt in this Caribbean hot pot. As the national saying goes, “We are all milky coffee. Some with a bit more milk, some with a bit more coffee”.

Cultural acts, beyond entertainment, also serve a deeper purpose; they are a way for people to express who they are and more importantly, to show they are still here. For the Warao, a thirty-five thousand strong indigenous body that holds fort in the delta of the Orinoco River, culture, their culture, is still alive, although dangerously slipping away from them as missionaries, European crowns, lawless pirates and local politics have tried to erode the very nature of their civilisation. Language, belief systems and their own forms of social and political organisation have faced century-long battles before the expansive ambitions of others, turning them gradually into a Spanish-speaking malleable working force and a guaranteed electorate. Nonetheless, they have kept together and the elders of their communities are confident in an age-old wisdom that sees passed the shallow promises of another world. They inspire and encourage a younger generation that is saying “enough is enough, now it’s time for us to be who we are”.

As part of this stance, culture plays a central role in the reaffirmation of Warao identity. Unique songs and dances mean that messages are still spread and important gods are still revered. A cultural act is not to be taken lightly, councils are formed and at length discuss when and where to perform certain rituals, for although a performance may unite a community and gather faith and courage for the next hunting expedition, calling on the spirits carries the equal risk of attracting the evil spirits. For the Warao, in nature comes the good and the bad, and one cannot be too careful when summoning its powers. Present day reality means that commerce and modern diets have replaced the importance of hunting in the community, but there is still great respect for the rare ceremonies that take place in the complex river life of the Orinoco Delta. “Warao” means the people that row, or the men of the canoes, and penetrating Warao life is certainly an aquatic adventure. From Tucupita, the chief city of the Delta State, the river splits and then splits again, until tributaries twist and mingle like a bowl of spaghetti, leaving the outsider lost and disorientated, without a clue as to where they came from and as to where they might end up. Journeys are hard to measure in distance or time, as a trip from one community to the other depends on the size of a motor boat, or whether one has a motor at all. Winikina, out on the tip of Delta, before the ocean’s water seeps in with bluer tides and bigger fish, has maintained a community true to its roots, with stilt-supported palm tree huts that peacefully hover by the river bank, and a luscious verdant backdrop that promises a jungle of secrets and sounds. The community is famous for being a stronghold of Warao resistance as well as still keeping alive some of its traditions. Although now heavily influenced by the political ambitions of Tucupita, Winikina still hosts authentic Warao ideals, and its people continue to believe in the strength and necessity of their cultural heritage.

Although practised less and less frequently, Najanamu is one of the most important dances of the Warao people, so the opportunity to attend such a ceremony is truly a special event. Some of the elders of Winikina fear performing the ritual, unsure as to what the retaliation from nature may be, but young leaders promise that Najanamu is now more important than ever in order to defy the invading cultural influences that are ebbing away at Winikina’s soul. They call it the sacred dance, and the term “najanamu” means the cultivation of the Moriche bark, the palm tree from which the Warao people survive, its inner fibres used for their woven craft, its trunks for the building of their huts and its fruit for food. The dance is a ceremony calling on abundance and summons the gods of the rains, the earth, the harvest and the fish. So strong is the ritual that the people will have to pay a price, and many narrate the stories of how members of the community shortly after a Najanamu ceremony have suddenly died for no apparent reason, other than having had to pay the cost for “moving so much energy”. Najanamu is a delight for the eyes and the ears, and performed at dusk, it takes a truly hypnotic turn. The women in long red dresses paint their cheeks and adorn their chests with necklaces made of nuts and seeds picked from the surrounding vegetation, alongside the less romantic modern plastic beads picked up in the towns. The men string together the same seeds round their ankles that click and clack with every firm step taken to the ground, while maracas, clenched in their fists, form a tide of sound that rises and falls as the dance proceeds. A pole in the centre of a circle with a small carved wooden figurine representing one of the gods is immediately surrounded by a couple, usually man and wife. The woman appears intensely hypnotised by the small god, hops up and down from side to side never taking her eyes off the sculpture, while the man on the other side tries to catch her attention frantically waving his maracas in time to her sweeping figure. A larger circle on the outside is formed by the rest of the men, who dance from left to right then right to left, as the other women from a line outside of the circle joining in with the chants, waiting for their turn to be called to the inner circle. They seem to enter a trance like state and once the dance is over, they laugh, as if in relief. Once a new couple comes to the centre, the dance is resumed and the same degree of intensity is reached, if not surpassed as the pressure and tension felt by all mounts and peaks. Because of the changing nature of the indigenous peoples in Venezuela, rituals such as these have stopped being the decisive force in many communities; television, education, the city, all offer new horizons and suddenly the calling of the good and evil gods don’t intimidate as they used to. However, Najanamu is not just nostalgia; it is still an important practice that has the power of educating a new generation in history, language and, of course, culture. If Venezuela is the melting pot is claims to be, and clearly is, then it is dances like these that can line up alongside the four-string guitars and the modern buildings in the parade of Venezuelan identity. Delta-deep, the maracas may seem from a distant planet compared to the shining offices of Caracas, but their importance is the same, for culture is made up by all, and all are very different.

All photos courtesy of Francesca Commissari