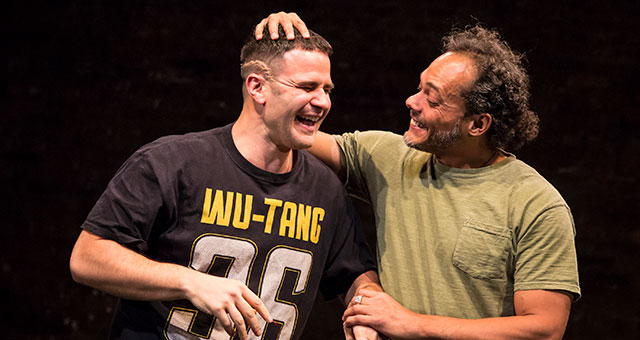 While diversity has been increasing onstage on Broadway in New York City in recent years, it can sometimes feel like the storylines represented on the Great White Way leave much to be desired.

Luckily, the Big Apple has plenty of shows playing on off-Broadway stages that more accurately reflect the demographics of the city. We were fortunate enough to catch one such play at the Actors Studio, a membership organization for professional actors, theatre directors and playwrights in New York City’s Hell’s Kitchen neighborhood.

Brother’s Keeper was penned by Actors Studio members Gabriel Furman and Javier Molina, and directed by studio Member and Academy Award winning writer, director, and producer, Bobby Moresco. The 90-minute play was developed over a couple of years in both the Actors Studio’s Playwright Directors Workshop and their Acting Sessions.

While the show ended its run in late November, we don’t want to give any spoilers about this fantastic play that has plenty of Spanglish and deals with caring for a family member with mental challenges, getting out of the projects, social work, faith, and lots more.

The play’s synopsis is as follows: It’s Halloween morning and Tito (Javier Molina) is about to get out of the drug game. He and his traumatically brain-injured brother Pacci (Gabriel Furman), are finally opening up “Maria’s,” the restaurant of their dreams with a little live salsa band in the back. But when Pacci starts seeing and hearing people that aren’t there, their lives are put in jeopardy. What starts out as the best day ever turns into the worse day of their lives and changes everything for Tito and Pacci in ways they never expected.

We had a chat with Furman and Molina about Brothers Keeper:

Sounds and Colours: How did you two meet and start working together?

Gabriel Furman: About 11 years ago we were finalists together at the Actors Studio. We got close cause we were like “Oh, you kinda seem like me. I like you.” We then were made members of the studio together and started this life long creative partnership from there.

S&C: It was so refreshing to see a play that tackled issues many folks who grew up in urban areas can relate to. Not just that the Puerto Rican main characters, or the reality of drug dealing & trying to get out of the game, but caring for a family member who needs dependent care. It’s something many of us have lived with. Tell us about the writing process for this play and producing it (for instance, the use of projection was an excellent way to showcase the difference settings on a low budget.)

Furman/Molina: We would write a scene and then take it into the acting sessions at the actors studio. We would improvise and see what worked. Then we would re-write the scenes and read them in the Playwright/Director’s Workshop part of the studio. About a year and a half of that kind of exploring got us through the first draft. Then we had a reading as part of the PDW festival at the studio. That’s when Bobby Moresco came and saw us. He then came up to us and was like “you got 50% of a play. I wanna help you get the other 50%”. He was a great help in really asking hard questions and structure. More re-writes and improvising brought us to where we are now.

The projection and production was all our amazing director Bobby Moresco and production team. Edward T. Morris, our set designer came up with the projections. We really wanted to represent the feel of where we come from. Both of us grew up in the hood. Javier in Passaic and Gabriel in Far Rockaway. When Edward showed us the images on the wall we were like, “Yo! That feels like home.”

S&C: Was any of the story inspired by real life?
Furman/Molina: Yes. Most of it. A lot based on Javier’s real life relationship with his mom and Gabriel’s spiritual practice growing up.

S&C: How did you find the right team to work with?
Furman/Molina: We are so damn lucky. Bobby got together this team of super heroes for an extremely low budget. They all have done big things and are professionals but they are also all artists who do it for the craft. We also had huge support from our artistic home, The Actors Studio.

S&C: We love that you involved a real-life work social worker (Marcel A. Rogers) to consult. Why was it important to involve a professional in the field?
Furman/Molina: We wanted to make sure all the facts lined up. We wanted to make sure that if there was ever a social worker in that audience that they would be like, “damn these guys really did their research.” Marcel (Rogers) was such a huge part of helping us bring the reality to this piece.

S&C: Gabriel, when I think of actors playing characters who are mentally disabled, I think of Robert DeNiro (Awakenings), Leonardo DiCaprio (Gilbert Grape), and Dustin Hoffman (Rainman). How did you prepare for this role?
Furman: First off, to even be mentioned with those greats is an honor and humbling so thank you. I rely on sensory work. It’s what we do here at the Actors Studio which is commonly referred to as Method Acting. I did a lot of research on Traumatic Brain Injury. Pacci was shot in the head at 10 years-old. And in my research I found that TBI’s are like finger prints. No two are the same. So I start with the science of what parts of the brain are effected and then let my senses dictate the truthful behavior. I also believe that there is nothing wrong with disabled people. They are angels on this earth that have come to teach us how to live with open hearts. I try to open my heart as much as I can and I welcome Pacci to do the rest.

S&C: Are there any plans to perform this play at different venues in the future?
Furman/Molina: We are currently in talks with producers to take this play to a bigger house. We are also writing the feature film version too. You can follow the future of the film on our website and social media @therealtalkfilms.

S&C: Speaking of film, you guys are currently featuring a wonderful short, Wonder. What was the impetus behind this story?
Furman: I was on vacation in Ireland and my girlfriend and I pulled into a gas station. I saw a man walk out of the store holding the hand of what looked like his son. The boy was wearing a full Wonder Woman outfit. Tears rolled down my face. What I saw in front of me was unconditional love. A real father that didn’t give a fuck about what others thought. Then I saw the whole film in my head and heart.

S&C: Why is this an important story to tell, especially from the aspect of a biracial kid?
Furman: Our kids need to know it is okay to be their authentic selves. As specially the ones growing up in the hood, like we did. We are conditioned with this outdated set of beliefs that need to be questioned and evolve.

S&C: How did you find the child actor for the film?
Furman: I was MCing a bar-mitzvah and this kid was breakdancing. I used to be a professional break dancer. I made a joke on the microphone, “That’s my son.” The hair on the back of my neck stood up. I asked Benji Siegel who plays Sammy to give his mom my email and come in and audition.

S&C: What’s next for you both? What can we look forward to this coming year?
Furman/Molina: We are in talks to turn Wonder into a TV Series and to turn Brothers Keeper into a feature and longer running off-Broadway into Broadway show. We are grateful and blessed.

Watch the trailer for Wonder below and keep up with Furman and Molina online. Wonder will be screened at the Queens Pride House in Jackson Heights this Friday, the 6th of December, at 8 p.m.