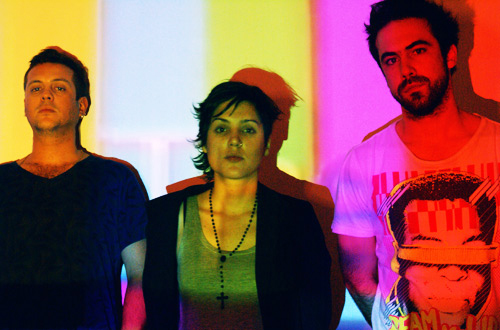 For many bands on the contemporary music scene in Chile, eighties new wave group Los Prisioneros remain an important point of reference. Los Prisioneros were one of the key bands that emerged in Pinochet’s Chile at the height of military rule and helped the country to establish its own musical subculture. Songs like ‘Quieren dinero‘, ‘Porque no se van‘ and ‘Quien mató a Marilyn?‘ encapsulated the frustration of young Chileans in frenetic three-minute  blasts. The band’s poppier elements saw them achieve greater commercial success than other bands of the era, such as Electrodomésticos and Fiskales Ad-Hok, while albums like their debut La voz de los ’80 continue to find new generations of listeners.

The latest national band to pay tribute to Los Prisioneros is electro-punk three-piece Miss Garrison, who have covered ‘Paramar’ for the soundtrack to new Chilean film Video Club, in which the everyday confines of an old-school video rental store become humanity’s refuge during the zombie apocalypse. Think Shaun of the Dead set in Latin America (even though something like that already exists in Cuban schlocker Juan de los Muertos).

Video Club was originally set to be released back in the first part of 2013 but for some reason was held back until a couple of weeks ago. A good time then for Miss Garrison to make their version of ‘Paramar’ available as a free download on Soundcloud. Don’t be afraid: it won’t bite.