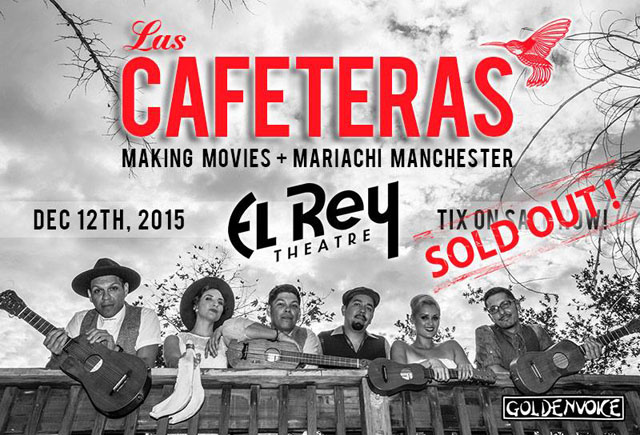 Socially conscious urban folk outfit Las Cafeteras are headlining a sold-out show in their home city of Los Angeles later this month and we wanted to share an EP of remixes of some of their best to mark the occasion.

The seven-piece band, who put on an energetic show designed to make you think, feel, and act, about social justice and the concept of borders, are well known for putting a spin on traditional Son Jarocho with Afro-Caribbean marimbol and cajón, poetry in English and Spanglish, and instruments like jarana, requinto, a donkey jawbone and a wooden platform called the Tarima.

With these special renditions of their songs, they seek to put “the party and vibrancy back into politics,” says band member, Daniel French.

“We may not see eye to eye on everything, but if we can’t dance together, how can we ever work together” says Hector Flores, another band member.

“Mujer Soy,” remixed by Japanese producer Yukicito, remixes the roles women play at home, at work, & in the community, through telling a day-in-the-life of a woman in East Los Angeles.

The remix of Mexican folk classic “La Bamba” by L.A.-based DJ/producer, degruvme, negates Donald Trump’s extended border wall, saying instead in Spanish, “I don’t believe in borders, I will cross, I will cross.”

We mentioned a sold-out show, which closes out their 21-city “Roots Remixed” Tour. It takes place on the 12th of December at the historic El Rey Theatre.

Also on the bill is Kansas City’s Making Movies, whom also talk immigration and the state of a changing and diverse America in this wonderful in-studio session with public radio station, 90.9 The Bridge. (Full interview and performance, including a cover of Willie Colon/Hector Lavoe’s “La Murga,” here.) Rounding out the bill is English-language mariachi band, El Mariachi Manchester. (Three words: Morrissey in mariachi!)

Listen to “Las Cafeteras Remixed” below.