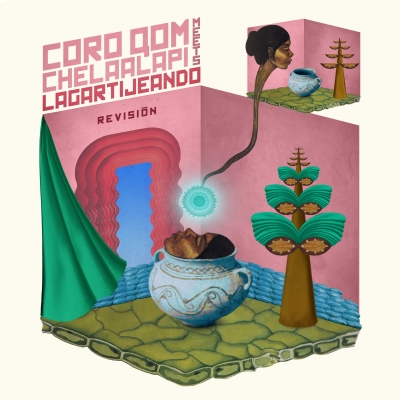 Welcome to the Revisión EP.

It’s the latest release from Argentinian producer Lagartjieando, which sees him team up with Coro Qom Chelaalapi, an indigenous group of musicians from his homeland’s northern province of Chaco.

No stranger to the celebration of cultural heritage, Lagartjieando himself embodies an artist who has worked prolifically across a number of traditional genres and styles to stamp his own distinctive mark upon culturally integral sounds. In Revisión the Argentine flexes his productive prowess, applying charging beats over the groups’ calls and choruses throughout the course of a stunning new release.

Coro Qom Chelaalapi, whose name translates from their indigenous tongue into “Bandada de Zorzales” or the “Flock of Thrushes”, have maintained a rotating lineup of musicians from the community since 1961. Recognised by UNESCO as a point of Living Cultural Heritage, they exist with the aim of preserving their culture and passing on its creative outpourings through subsequent generations.

In this encapsulating EP the groups’ traditional instrumentation is placed alongside a thundering electronic finish. Unmistakable sounds such as the screeching, single-stringed nivie take pride of place, cutting out melodies amongst atmospheric grooves and towering beats fused with hand-me-down tales of conquistadors, traditions and fables. The EP also features three excellent remixes offering alternative takes on the three original tracks from the EP, ranging from the audaciously bassy to out-and-out deep house.

Over 50 years of indigenous heritage packed together with one of Argentina’s most talented contemporary artists. What isn’t to love?