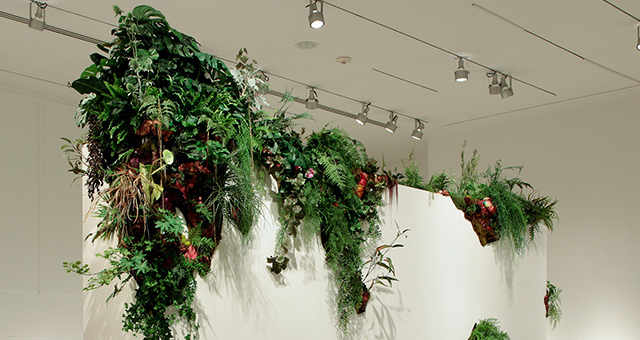 There’s never a shortage of art exhibits in New York City, but the spring and summer are a great time to view exhibits by Latino artists from all over the diaspora.

Harlem’s El Museo del Barrio, for instance, is currently showing NKAME: A Retrospective of Cuban Printmaker Belkis Ayón, the late Cuban visual artist who mined the founding myth of the Afro-Cuban fraternal society Abakuá to create an independent and powerful visual iconography. The show is on view through the 5th of November.

And over at the Miller Theatre at Columbia University, Harlem-based Colombian-American artist Lina Puerta transforms its lobby with a new installation from her Botánico Series, inspired by weeds and uncontrolled nature within urban spaces. The display opens 17th of July through the 29th of June, 2018.

Exploring the tension between humans and the botanical world, Puerta’s ongoing series, which she started in 2010, evokes nature’s resilient response amid efforts by humans to exert control.

We spoke briefly with Puerta about her work.

Born and raised in Englewood, N.J., by parents from Chinchiná, Colombia, Puerta tells us she took an interest in art at a very young age. Her preferred medium is mixed media, including discarded materials.

When asked about her influences, they are living things of all sorts: “Nature, fashion, the body, urban decay,” she says.

“I am interested in nature’s capacity to reclaim space and break down artificial, human-made structures,” Puerta says in a press release issued by the theatre. “In this series, I use solely artificial/human-made plants that are normally designed to adorn and create maintenance-free gardens, which are static and under our absolute control.” Utilizing a wide range of materials—including concrete, clay, wood, foam, fabric, paper pulp, handmade paper, and craft and recycled items—the result is a mimicking of weeds slowly spreading into abandoned spaces, exploring notions of control, consumerism and life’s fragility. 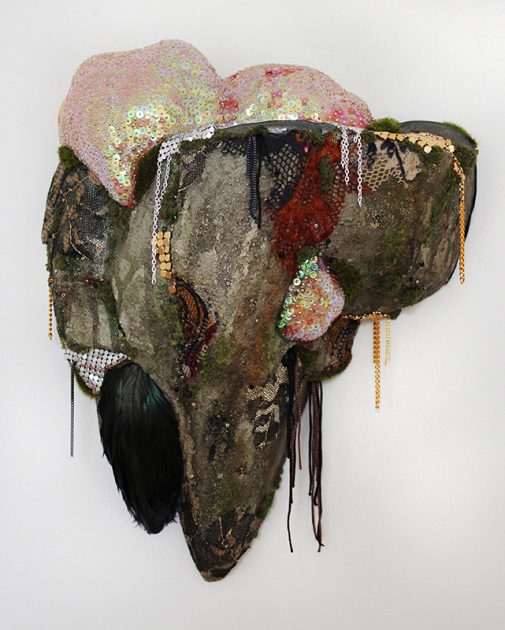 Puerta’s work at Miller Theatre is presented in collaboration with UPTOWN, a new triennial that surveys the work of artists who live or practice north of 99th Street in Manhattan. UPTOWN is on view from 2nd of June – 20th of August at the Wallach Art Gallery, 615 West 129th Street between Broadway and 12th Ave., on Columbia University’s Manhattanville campus.

Miller Theatre will host a creative conversation with Lina Puerta on the 17th of Oct., co-sponsored by the Columbia University Arts Initiative.

Located on Broadway at 116th Street, the Miller Theatre lobby is open to the public during the summer Monday through Thursday, from 10 a.m. to 6 p.m., and Friday from 10 a.m. to 3 p.m.

Puerta has shows coming up in New York City and Oxford, Miss., this fall. She’ll also participate in a group show in Paris, France, this fall. Learn more at her website, and on Instagram.