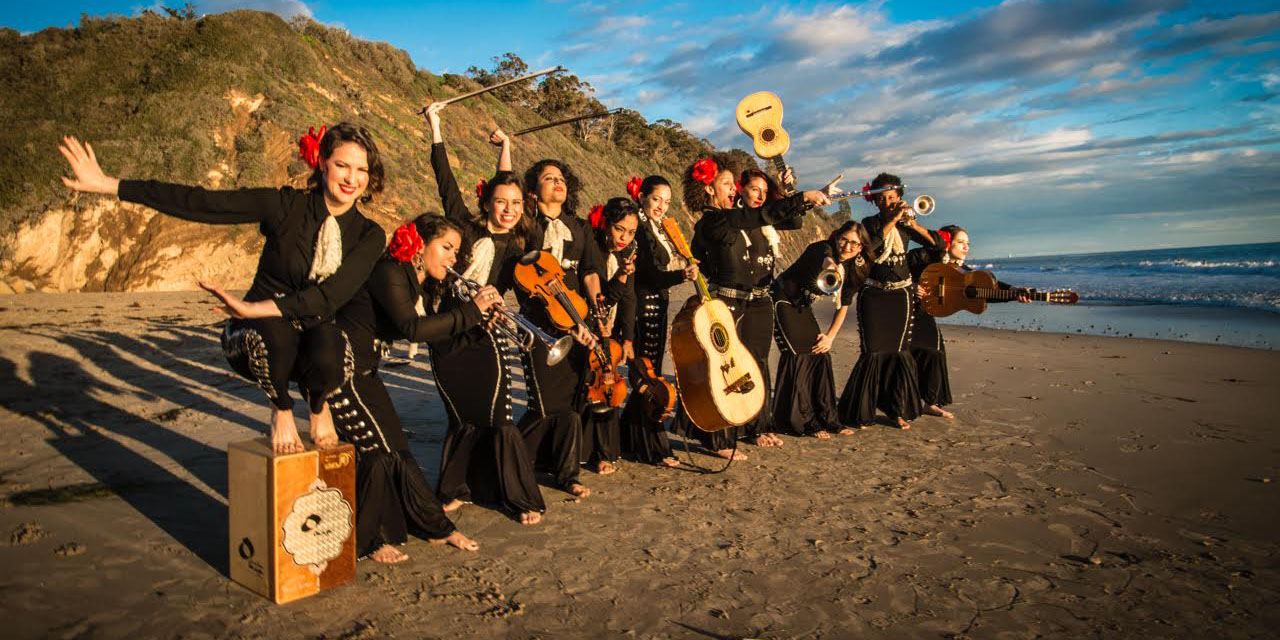 There’s something about a mariachi band that makes onlookers break out into a smile and a joyous sway. Whether they’re performing in a public square or  bust into a wedding party reception, they are a crowd pleaser, and New York City’s Flor de Toloache definitely have that part down pat.

But that’s where the similarities with this 13-piece ensemble and the traditional style of musical group from Western Mexico end. Flor de Toloache are unique in that they’re considered NYC’s first all-female mariachi (the genre has been dominated by men since the 1800s, according to this FoxNews.com piece on the band). They’re also made up of musicians with a variety of ethnic backgrounds; not 100% Mexican as nearly all mariachi bands tend to be. The band also don’t only stick to the traditional songs, such as “Cucurrucucú paloma.” They have original music, and will cover popular music from other genres with a mariachi spin.

But New York City readers can catch them on stage at Terminal 5 on Dec. 9. (Additional tour dates appear below.) We were able to score a Q&A with the ladies as they headed from Chicago to their next stop in Ohio.

Sounds and Colours: How did you all get together and decide on making mariachi music?

Flor de Toloache’s Mireya Ramos (violinist, guitarrón player, vocalist, composer and arranger, who is of Dominican and Mexican descent, and was raised in Puerto Rico): My father was a mariachi singer in Puerto Rico. When I moved to New York, I was offered to join a local mariachi in Brooklyn lead by our mentor and friend, Don Toño. Although I grew up with the music, I hadn’t played it. I started doing gigs with the mariachi, and not only did I meet many musicians, but I learned about the Mexican culture through the music. About five to six years into gigging with Mariachi Angeles de Puebla and freelancing with other bands through the city, I came upon a couple of all female mariachis in the west coast and that’s when I came up with the idea of an all female mariachi ensemble. Since we are in NYC, I knew it would be something important being the first all female mariachi group from the Big Apple. The timing was perfect! The first person who came to mind was my friend Shae Fiol, co-director of the band. She plays the vihuela, a main instrument of mariachi. She picked up the style quickly and our voices just gelled magically. The rest is history…

S&C: Who are your biggest influences?

S&C: What has surprised you about audiences most while playing out, either on tour or in NYC?

Ramos: How universal mariachi music can be and how you can connect with all people through music. It’s cool to take people through a journey, whether it’s a person’s memory of Mexico, songs that their grandmother use to sing, songs from their childhood, or something refreshing and new. It’s cool to see all those reactions in people’s faces when we are performing. It’s also an honor that through this music and concept we can empower women throughout the world.

See Flor de Toloache on tour with The Arcs: