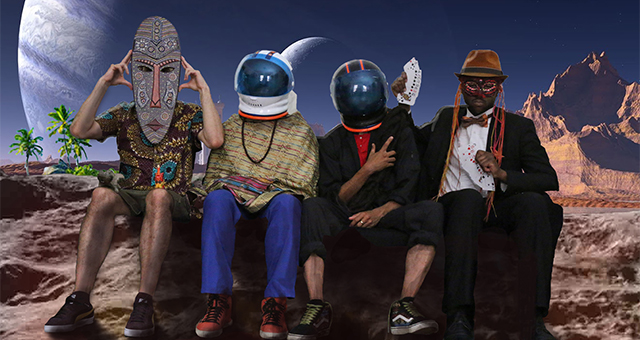 New York City’s Andres Jimenez, who plays drums for MAKU Soundsystem and Bulla en el Barrio, has been making music under the moniker Dilemastronauta since 2009. The native of Bogota, Colombia, tells us this side project was inspired by “life in general” and his love of percussion.

“I wanted it to be a platform where music from all over the world can be used for elements of creativity and ultimate inspiration,” he says.

Jimenez invited several musicians to jam with him throughout the years. The sounds they’d conceive together would include keyboard, bass, drums, melodica, saxophone, and more.

Eight years later, Dilemastronauta has an official lineup and an expanded name along with a powerful new single.

Dilemastronauta y La Tripulación Cósmica is made up of Jimenez on drums with fellow MAKU band mates Juan Ospina on vocals and bass and Isaiah Richardson Jr. on harmonica, sax, and clarinet. Rounding out the band is Richard Gallo on keyboards.

The new single is called “El Cohete,” which translates to “the rocket.” It is the lead single for a forthcoming album called En Orbita (In Orbit) that will be released under Peace and Rhythm record label later this fall.

“‘El Cohete’ is about Juan’s process of creating an identity from the time he lived with his mother, who encouraged him to pursue music, and his description of the ancestral roots of his family. It’s also about him moving to the United States and encountering racism for the first time,” Jimenez says.

Dilemastronauta y La Tripulación Cósmica will be playing at Barbes on the 2nd of October and at Starr Barr on the 27th of October.

Stream the single on Bandcamp below and grab it on iTunes.