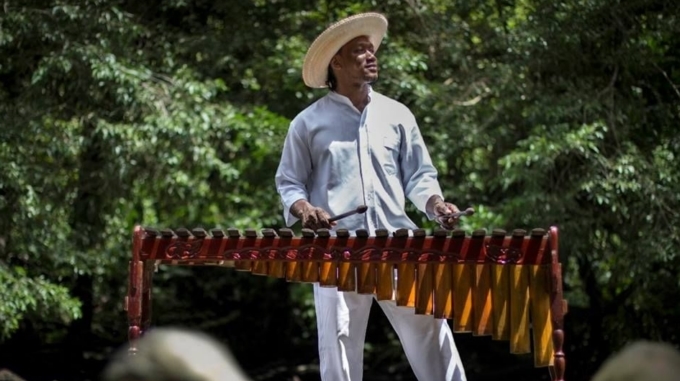 An Ode to the Marimba: Colombian Pacific Mourns the Loss of ‘Marimbero’ Ángel Marino Beltrán

The Pacific and wider music community throughout Colombia has been in mourning this week, following the tragic murder of marimba player, Ángel Marino Beltrán, in Timbiquí, Cauca last Sunday evening. Though still under investigation, the killing appears to be the latest in a worrying trend of increasing assassinations across the country, since the signing of the country’s 2016 peace deal.

Celebrated as one of the regions most talented marimberos, Ángel Marino Beltrán’s best-documented work was with Grupo Socavón (a former group of fellow Timbiquí musician Nidia Góngora) although the gifted musician was also regarded widely for his contributions to music and culture throughout the community sharing his knowledge, experience and, of course, enchanting sounds.

For tight-knit Pacific populations, where cultural manifestations are at the heart of all things involving society, marimba music takes centre stage in numerous ceremonies and rituals such as arrullos, curralaos, chigualaos and alabaos. Much more than musicians in collectives, marimba plays a fundamental part of the community’s social fabric; marimberos like Marino are the orchestrators of the gathering. Ángel Marino Beltrán was the one normally found hovering above, picking out the rich notes, that hang so heavily at the the heart of it all.

Grupo Socavón de Timiquí are themselves a group of musicians founded with the aim of strengthening, conserving and bringing the music of the Colombian Pacific to a wider audience.

Marino’s contributions were in their own way monumental to a culture under constant threat. In celebration therefore of the accomplished marimbero, a fleeting introduction to the sounds he was so central in the making of, seems necessary.

With a number of intricacies in style and rhythm varying between towns lining Colombia’s Pacific coast and the vast river network that runs parallel, the term currulao best speaks for the broader range of styles, rituals and dances which Grupo Socavon and the marimba of Marino would interpret.  Other variants such as berejum, pango, aguachica, agualarga and patacoré are characteristic throughout the style, which plays out as a metaphor between humans and the sea; a powerful and resonant force for those living on the Colombian Pacific.

Drawing on African rhythms and European melodies, distinct instrumentation is central to the blueprint, produced from locally sourced materials, such as the cunonos ( the long narrow drums that allude most closely to ‘curralao’ in name form) and percussive guasá shakers made from local woods, hollowed out to give off a rasping, grater-like sound. Yet it is probably the Marimba de Chonta, like the kind Marino was best known for commandeering, which gives the music from the central and south Colombian Pacific the most defining element of its identity.

Marino’s contribution to the culture surrounding the instrument is not to be understated and is quoted throughout a 2010 LA Times article on musicians gathering in Tumaco, Nariño, to help fight the effects of displacement and other social factors threatening the instruments’ existence. The positive impacts of Marino’s work will undoubtedly continue to be felt by younger musicians throughout the region.

Going a whole octave lower than a regular vibraphone and slightly out of standard musical tuning the marimba’s musical nuances carry a unique cultural distinction that makes its raining sounds so special. UNESCO added ‘Marimba Music’ as a point of intangible Cultural Music Heritage in 2015, a time at which Marino himself was a central figure in the instrument’s story.

The tragedy comes as a huge blow to the community of Timbiquí, Cauca and the wider Pacific coast where largely Afro-Colombian communities live out a peaceful existence, often imposed upon by local armed groups and overspilling violence from the surrounding region.

Since the 2016 peace treaty in Colombia was signed, power vacuums left throughout some of the country’s most underdeveloped regions have been targeted by local armed groups. Community and social leaders alongside other key figures offering stability in vulnerable communities throughout the country have been frequently killed in pre-medidated attacks by marksmen. Since signed in 2016 around 400 people are recorded as having been assassinated in Colombia.

Whilst more details of Marino’s heartbreaking assasination may or may not reveal themselves over time, the devastating blow represents another direct threat to cultural preservation in the region; music of course will suffer as well. Most achingly, the loss will be felt heaviest by Marino’s family, across his community and the wider Colombian Pacific. Timbiquí has lost a son, just as the marimba has lost a father.

It is then with the weighty lyrical pertinence of a Pacific Coast homage, interpreted here by Grupo Socavón, that seems best fitting to close out our ode to Ángel Marino Beltrán, and the marimba into which his magic was woven.

‘Como tocaba, como se oía, como repicaba esa marimba’ (How it played, how it was heard, how that marimba used to chime).