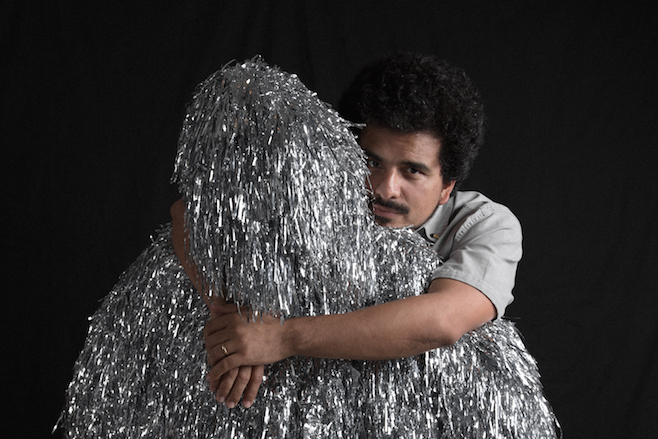 Tinsel people started dancing around Helado Negro‘s Twitter timeline (and stage shows) about a year ago and it’s something we just had to ask him about when we ran into him at the Latin Alternative Music Conference earlier this month.

He told us it was something he developed for his performance at the 2014 Vive Latino music festival in Mexico City.

“I’m a hyper visual person, like most people are, and it was just a way for me to draw attention to people, because I’m on stage by myself,” he said. “I threw myself into the world of dance in the form of these [tinsel] people. So, now I’ve been choreographing movements for them. It’s something I know nothing about. It’s a way for me to create more percentages of the performance that can be developed and further pushed for people to watch, enjoy, and listen.”

Helado Negro, real name: Roberto Carlos Lange, was using Twitter and other forms of social media to recruit folks to serve as “tinsel” people who dance. But now, the feature of his live show has taken on a more meaningful role.

For instance, for a recent gig in which he opened for Ondatrópica at Chicago’s Millennium Park, Helado Negro hooked up with a dance company that helped him choreograph a routine for the “suits,” as he refers to them.

“I work with professional dance companies for two to three days to present something that’s all choreographed to the music,” he said with a big smile. (Watch a snippet from that performance here.)

And, yes, there is a routine for his latest single, “Young Latin and Proud,” which we are loving as one of our summer anthems, and a positive one at that!

“I think we all are [young, Latin, and proud],” the Brooklyn-based singer said. “It’s more of like a lullaby. It’s a sense of self-pride. It’s a sense of private pride. It’s not so much something that you’re like having to wear on your shoulder and tell someone every five seconds about it. It’s something that you know you are and it’s kind of this individual confidence.

“And, it’s something that I’ve always felt throughout my whole life. It’s like your parents telling you they love you every night. It’s like you’re letting everything go from the day, and someone gives you that little piece of support, and then you drift off into the clouds and go to sleep,” he added.

Watch a beautiful performance of “Paz a tí,” by Helado Negro (and, yes, it features a tinsel person!) accompanied by the Saint Paul Chamber Orchestra of St. Paul, MN, which took place this past March, below.