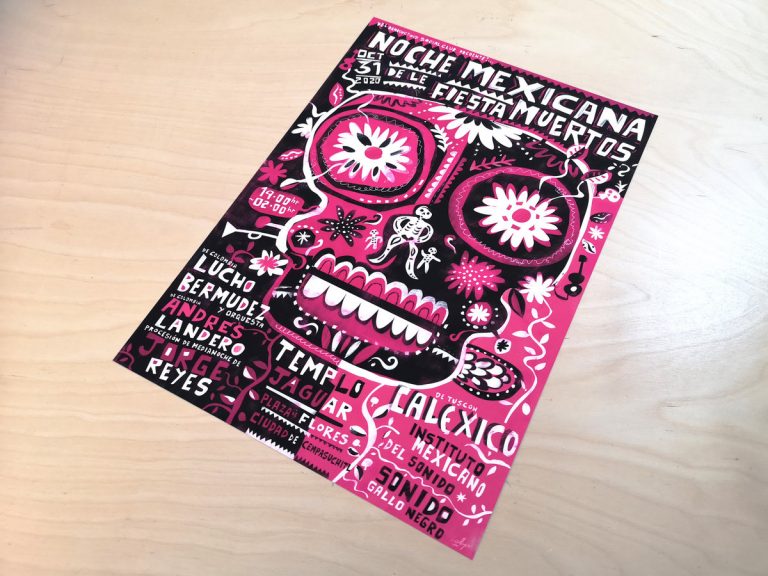 The Ultimate Dia De Los Muertos Poster Available for One Week; All Profits To Charity

A frequent collaborator of our’s, and a designer whose work always captures our attention, Lee Hodges has put together a gig poster for his “ultimate” Dia de los Muertos party. Lee helps run the Rambunctious Social Club in south west England, whose Day of the Dead parties are things of legend. This year, despite a party not being possible, he couldn’t contain himself and a gig poster was still created, though this one featured his fantasy line-up.

Lucho Bermudez, Andrés Landero, Sonido Gallo Negro, Calexico, Mexican Institute of Sound and Jorge Reyes are all in attendance, for a party taking place at Templo Jaguar in the city of Cempasúchitl, or at least that’s what the poster would have you believe. “Dia De Los Muertos has always held a particular fascination for Rambunctious Social Club, where we throw a riotous Mexican Night of the Dead Ball every year for 10 years, except this year. [The poster] serves to highlight the current plight of live music”, says Lee.

A1, A2 and A3 sizes of the poster are available now, and for one week only. They are printed by Printer of Dreams in London with all profits going to a charity that will be chosen through social media this week.

Head over to rambunctioussocialclub.bandcamp.com to get your poster before it’s too late, and show your support for live music