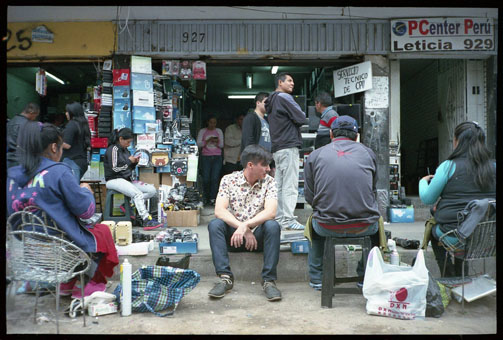 Brooklyn’s La Mecánica Popular has gone through a few iterations as far as band members since we first wrote about them in 2013, but one important factor has remained: band leader and composer, Efraín Rozas.

As they ready to record their next album (called Roza Cruz) on Brooklyn’s purveyors-of-vinyl label, Names You Can Trust, we’re pleased to premiere the video for ‘Montame en la tormenta,’ which is a cover of The Doors’ “Riders on the Storm.”

Rozas tells us he made this arrangement of the song in a very organic way.

“If you listen to the original song, the bass and keyboard patterns already have a cumbia feel to it,” he says. “The video was made by a Peruvian video artist I admire, Diego Contreras. It is a goodbye to the first ‘era’  of La Mecánica Popular. Next week, we are going into the studio to record our second album, Roza Cruz, which is inspired by the political movement that many avant-garde jazz musicians created in the 70s, and in the context of the Black rights movement. They decided to stop doing music to entertain people, and to create a Black avant-garde, different from the American ‘white art’ world. Roza Cruz is a humble attempt to make danceable Latin American experimentalism: to take away Latin American social dance music from mere entertainment spaces and take it to places that challenge ourselves as musicians, both musically and spiritually.”