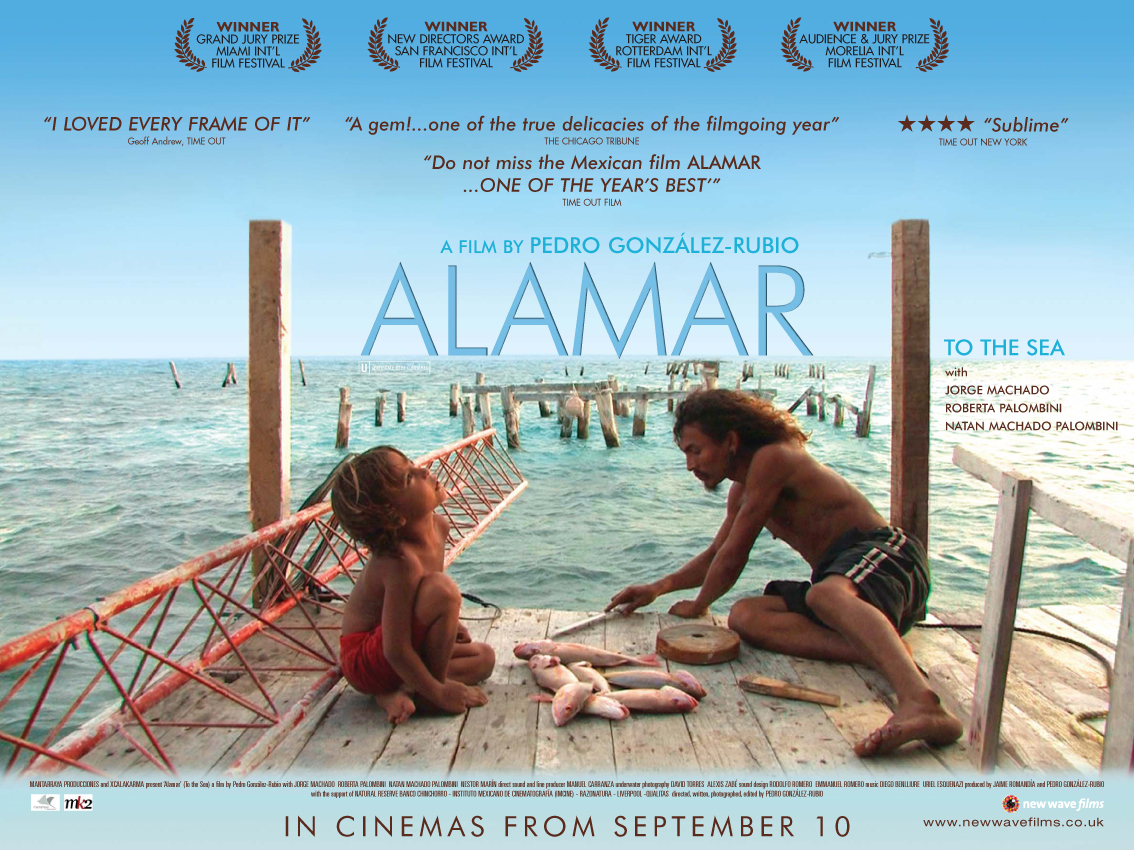 Alamar (To The Sea)

Pedro Gonzalez-Rubio’s 2009 documentary Alamar (To The Sea) is a film about life. You could say of course that all films are about life in one way or another but here the camera literally teems with living vitality and the essence of existence. These actualities form the relationships that are the arc of the film and bathe it in an exquisite allure and charm.

Alamar is the story of a young boy, Natan, and his separated parents. His Mexican father Jorge met Roberta when he was travelling in Italy, and the two embarked on a relationship. After Natan’s birth, they split up and Jorge returned to his homeland while the baby stayed with his mother in Rome. The reasons for the split are not mentioned in the film as they hold little relevance to the narrative: it is a modern social reality with which many young people can identify, and Alamar pertains to show things as they are, not why they are.

And when things are as stunningly depicted as they are in the film, you can understand why Gonzalez-Rubio took this approach. Jorge is now living on the tropical coast of Banco Chinchorro in southern Mexico, where Natan goes to visit him. Staying with his own father (at least that’s what we assume from the numerous references to abuelo, or ‘grandfather’), Jorge is making a living fishing the majestic reefs with the old man, and their home is a hut on poles, accessible only by boat, in the brilliant turquoise shallows. It is the achingly beautiful simplicity of this lifestyle and the gorgeous tropical backdrops that make Alamar such an exceptional film.

The boy Natan adapts effortlessly to this radical shift in routine and Gonzalez-Rubio follows the three generations of men as they go about their lives. Days are spent out on the reefs, where Granddad and Jorge go spear fishing amongst the corals, harpooning fish and lobsters to their hearts’ content. Granddad is as elegant as a seal in the water, and just as rotund and jocular out of it. With the days’ catch they head back to the stilted hut for some gutting and de-scaling, as they prepare to trade their wares with other fishermen. The promise of juicy, fishy tidbits attracts all manner of seabird to the hut, not to mention larger, more predatory creatures which lurk in the water underneath, and Natan delights in throwing them leftover morsels.

In spite of the large distance between their regular lives, and the extended periods of absence that this inevitably implies, it is clear straight away that there is a strong bond between father and son, and this relationship forms the principal focus of the film. It is a love evident in simple yet touching gestures and images, a father cradling his seasick son in his arms, the two indulging in playful rough-and-tumble, and most of all in the father’s desire to teach his son everything he knows, and the boy’s willingness to follow him in it all.

In addition to the central theme of male bonding, the second key relationship emphasized in the film is that of man with nature (and this refers to man in the truest sense of the word, with Roberta the only woman seen in the entire film, and even then only briefly at the start and finish: for a study of the mother-daughter bond, I heartily recommend the Chilean documentary Hija, directed by Maria Paz Gonzalez). This is a world of incomparable purity, as the locals live in perfect harmony with the elements, resourcing all they need from their surroundings and conforming to the natural balance of the area.

Apart from the mesmeric cinematography and the heartfelt clarity of its protagonists, much of Alamar’s remarkable warmth lies in its appeal to the spirit. If ever there was a film to make you cancel the internet subscription, snap the travelcard in half and say your goodbyes, this is it. The film’s true strength lies in its depiction of life at its most romantically ideal, a lusted-after existence that for almost all of us is destined to be nothing more than fantasy. Gonzalez-Rubio takes that idealism and returns it to his audience in spades in a work of breathtaking splendour and radiance.