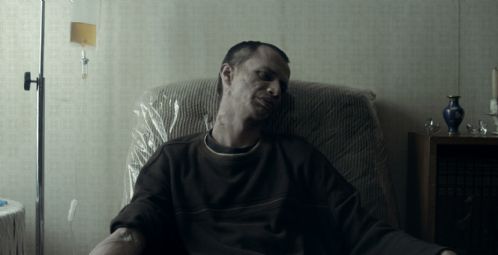 In his minimalist debut feature Halley, Mexican director Sebastian Hoffman offers a relentlessly bleak portrait of urban isolation which is at times disorienting and persistently unsettling. With grotesque imagery lying at the heart of his narrative, Hoffman’s mood drama tracks the protagonist’s incessant battle with his own body and his inability to come to terms both with his endless suffering and the healthy people in the world which surrounds him.

The film’s protagonist, Beto (Alberto Trujillo) is quite literally a dead man walking, a living corpse who has been embalming his body and obsessively treating his gaping wounds for time immemorial in order to conceal his secret from the outside world. Unfortunately for him, his body’s advanced state of decomposition means that he can no longer hide his decrepit frame from the gaze of others.

Faced with the impossibility of continuing to live in regular society, he decides to withdraw from the living world and retreat into his small apartment to live out his last days in sheer isolation. However, his plans will be thwarted by Silvia (Luly Trueba), the owner of the twenty-four hour gym he intends to resign from, as she refuses to let him leave without one final farewell.

Much of the film is spent charting Beto’s physical deterioration, awkwardly placing the viewer into the role of unwilling voyeur. We will gaze at the frame, engulfed in silence, as close-ups depict Beto peeling his shirt off a sizeable scab on his back; we will observe his attempts to seal a gaping wound on his torso with surgical tape; we will watch uneasily as he plunges a needle from a drip of embalming fluid into his scarred arm in an extreme close-up, complete with squelches as the metal point pierces his skin.

But we won’t ever truly understand why we are doing so. Though undoubtedly striking, the voyeuristic positioning of the camera does no more than reiterate the same point time and time again: the viewer knows that the (un)dead Beto is in pain, and needs to constantly tend to the wounds on his body to subsist, but why do they need to see him do so quite so relentlessly for the entire duration of the feature?

This over-reliance on the shock-value of the grotesque could, of course, be forgiven if other aspects of the plot were developed further, making the protagonist a character the viewer is actively willing to invest time in. Unfortunately, Beto remains hopelessly one-dimensional from the film’s start to the feature’s end. The viewer will never learn how Beto has arrived at his state of being, nor any other intriguing aspect of his psyche which will make the viewer eager to watch his story develop.

Though Trujillo perfectly encapsulates the desperate isolation of his protagonist with his emotionless, one-word replies and persistently dead-eyed expression, there is no doubting that this is a man tired with life and willing to leave it at the earliest opportunity. At a stretch, it could be argued that Beto’s reticence, matched with his corporal obsession, form a portrait of the existential trauma he experiences as he struggles to reconcile his inability to die with his endless suffering.

Regardless, the increasingly notable lack of dialogue and the film’s desire to dwell on Beto’s hopelessly depressing lifestyle do little more than alienate the viewer as the film progresses, and certainly do not make for compelling viewing as the film rolls on.

At times, Halley does indeed hint at something more, with the film’s best sequences beautifully juxtaposing Beto’s degradation with the seemingly ‘healthy’ bodies which surround him in the gym he works for. With the camera’s blurred lens lingering portentously over groaning body-builders as they flex their muscles, there is a delicious irony in the depiction of their narcissistic obsession with ‘improving’ their bodies in the face of Beto’s hopeless decomposition. After all, as Beto knows all too well, all of the time and effort they are investing in ‘perfecting’ their bodies is ultimately in vain, as they will eventually succumb to the very same processes plaguing his own decomposing body.

The film also shows potential when the protagonist’s existential crisis is thrust to the forefront of the narrative, with the sermon of a fundamentalist priest juxtaposed with the more positive thoughts of Silvia as she muses about the meaning of life later in the film. In the first instance, Beto is part of a congregation of afflicted parishioners who hear the priest vehemently declare that man is born to suffer so he can be saved by God, while Silvia directly contradicts this notion when she later declares that life is not worth living unless it’s enjoyed to the fullest.

Unfortunately, these intriguing questions have little to no lasting effect on the filmic narrative: in fact, Beto fails to offer any sort of reaction to either of these musings during the film, neither immersing himself in the passionate prayers of the congregation nor aiming to live for the day when he has the chance to have a meaningful relationship with his former boss.

As such, these philosophical concerns are only ever given a cursory glance over the course of the film, thereby failing to have a meaningful impact on later narrative developments. For better or for worse, the existentialist ennui of the protagonist is always at centre stage in Halley. Although initially compelling, the film’s brooding tone and unnecessarily persistent focus on grotesque iconography means that this tale of isolation will leave you more alienated than amazed.

Halley will be screened at Genesis Cinema, Mile End, London on the 9th July as part of the East End Film Festival