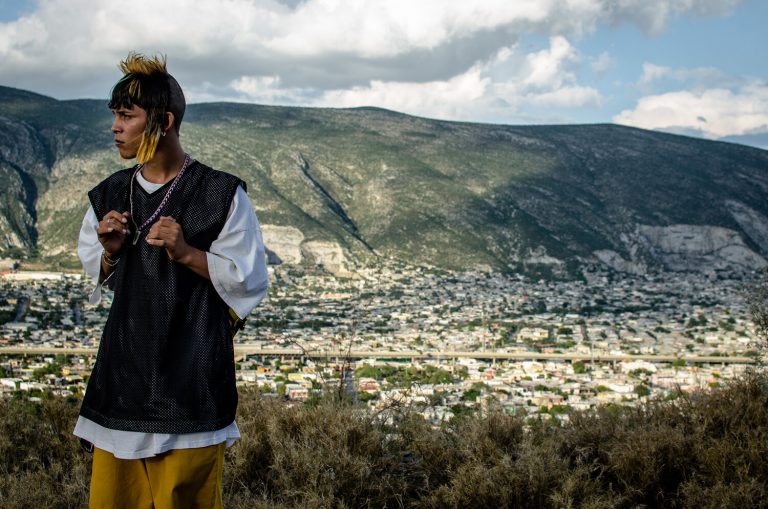 ‘I’m No Longer Here’: A Coming-of-Age Story About Music and Migration

I’m No Longer Here (Ya No Estoy Aquí) is a remarkable new film by Mexican Director Fernando Frías de la Parra. Released on Netflix in May 2020, it has made an impressive debut at international film festivals across the globe, including Cairo International Film Festival in 2019 and Tribeca Film Festival in 2020.

With the help of playful editing by Yibran Asuad, the film unfolds in a non-linear narrative, following the story of Ulises – the teenage leader of the ‘Terkos’ gang in Monterrey, North East Mexico. The ‘Terkos’ subscribe to the counter-culture of Kolombia, a lifestyle that consists of wearing baggy clothes, listening to a slowed-down version of cumbia music, and self-styling their hair with clippers and gel into a helmet-like shape. Their striking image and attention-commanding style (costume design by Malena De la Riva and Gabriela Fernández) is their armour against the drug cartels and other gangs with whom they co-exist.

Like his namesake, Ulises embarks on an epic journey of selfhood following an altercation with the new ‘F’ cartel that forces him to leave home, ending up in Queens, New York. One of the themes debunked by Frías’ film is that of the motives of gang culture – the ‘Terkos’ are a gang by definition, but they live for music. You can’t help but feel defensive when Ulises’ father accuses him of being a local thug; contrary to this belief, and perhaps popular belief, the trouble found Ulises, not vice versa. Viewers might expect the film to present a condemning view of the immigration system but this doesn’t come glaring through in the film. Ulises’ interactions with the US authorities are few and amicable.

Ulises is played by Juan Daniel Garcia Treviño who takes us on this journey with him, and his intensity and at times remoteness in the performance is mesmerising. The camera agrees, and follows Ulises with intimate travelling shots. In New York, Ulises is met with either respect, verging on fandom, or ridicule, and he longs to be back with the ‘Terkos’. There are clear tensions between negotiating life as an individual, or as part of a group, and Ulises’ seriousness sometimes makes it difficult to remember that he is only a teenager. His most meaningful interactions are one-to-ones with other people living on the periphery of society – Lin (played by Angelina Chen), the lonely granddaughter of a Chinese shop owner, and Gladys (Adriana Arbelaes) a Colombian dancer for hire. Ulises and Lin’s clumsy one-to-one interactions are endearing, but when she takes him to a party, he loses the ability to connect with her when she is part of her group, and leaves the party both alone and deeply homesick.

I’m No Longer Here has a documentary-like quality to it, and whilst it may require a more patient viewer, it is well worth the watch.

I’m No Longer Here is available to stream on Netflix.