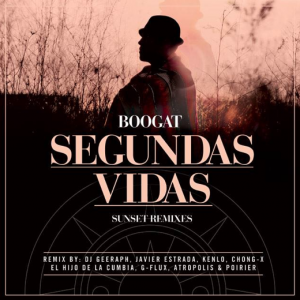 I first met Boogat through his 2011 record Pura Vida and his amazing collaboration with Mati Zundel in “Alto de la Paz” which, even through some broken-Spanish rapping, floored me because of the strength of Boogat’s delivery: powerful, passionate and unapologetic. He’s come a long way since then, being featured on quite a few tracks this past year from the likes of Atropolis, El Remolón and Javier Estrada, among others. El Dorado Sunset: El Gran Baile de las Identidades is his latest record, where he ups the ante when it comes to the beats, featuring everything from cumbia bass to salsa to rai, while touching upon themes relevant to the immigrant experience and the assertion of different identities.

The record is pretty impressive, so it’s no surprise it just got an EP worth of remixes from album producer Poirier, Montreal’s DJ GeeRaph and Kenlo, ZZK’s own El Hijo de la Cumbia, Lima’s Chong X, Washington DC’s G-Flux, NYC’s Atropolis, and Monterrey’s Javier Estrada. The EP, titled Segundas Vidas/Sunset Remixes is actually all about that, having these producers give a second life to eight of Boogat’s well-crafted tracks. One of the standout remixes is Javier Estrada’s take on “Llévame Pallá”, which turns Boogat’s original salsa dura track into a north Mexican digital cumbia/3ball song. It’s a clever spin to the original, specifically because it doesn’t lose its essence. The same goes for El Hijo de la Cumbia’s “Creída”, which is typical of his production style. I can’t say the same about DJ GeeRaph’s take on “Único”, specifically because Lido Pimienta’s voice is the anchor of the original track and the remix neglected to include her, while loop sampling Boogat. In the process it stripped the song of some of the warmth of the original. Chong X’s excellent cumbia/trap remix of “Cumbia de las luchas”, adds some great electric guitar riffs, augmenting the roughness of a tale of discrimination and discontent.

Segundas Vidas/Sunset Remixes is heavy on the cumbia so, for something completely different, don’t miss Poirier’s tropical rumba remix of “WOW”. Despite having the cumbia rhythmic base, he incorporates it with Caribbean tropicalia, making for one hell of a dance number among many. The album is a great companion to El Dorado Sunset: El Gran Baile de las Identidades, but I highly recommend you listen to Boogat’s complete album first, so you can revel in the contrast created by such different production styles from each of the remixers. It’s a party record best enjoyed alongside the original.

You can download Segundas Vidas/Sunset Remixes for free from sunsetremixes.com