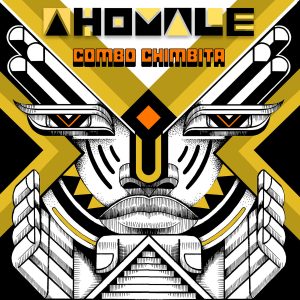 The first element you notice about Combo Chimbita—whether live in concert or on a recording like “Sola”, the opening cut from their incredible new album Ahomale—is Carolina Oliveros. Her sublime feminine presence, her intensity, grace and fire is contagious and her powerhouse voice is an instrument to be reckoned with. In a way, Oliveros is a vessel, a spirit medium channeling both ancient roots and future destinies. Her fierce voice could be called “a force of nature” (to sound a tad trite about something that is not trite at all), yet there is no denying how she effortlessly blends the natural and the human, the carnal and the spiritual, in a very forceful way. She is so full of rollercoaster emotions — pain, love, desire, sadness, ecstasy — that you are brought along on waves of feeling better left unexplained except to be conceived of as emanating from some ultimately unknowable mysterious place, perhaps divine or cosmic. As a vocalist, Oliveros is at once wise and childlike, sweetness and spice intertwined. She also keeps the beat sizzling with the Colombian guacharaca (a shiny, ridged metal percussion instrument somewhat like the Cuban güiro but harsher), thus in a way she is the band’s time, as well as mouthpiece.

So Carolina Oliveros and her voice is what you’re first struck by, but then the rest of the band kicks in and your goosebumps turn into lightning shivers as the combo transports you into another plane of existence somewhere between outer and inner space. And what a combination they make; Prince of Queens is responsible for the swirlingly hypnotic synth stabs and massive low-frequency bass lines; Niño Lento plays guitar that can growl like a tiger or emulate the quicksilver sounds of the sea, while Dilemastronauta powerfully propels the proceedings along with his incredible drumming and percussion. Each player is an expert at what they do, a whole self-contained musical being, bringing years of experience, style and talent to the proceedings, and every song has its own vibe and flavor, yet the four of them as a unit comprise a compellingly integrated whole with a unique sound that blends too many elements to be categorized as anything but Combo Chimbita.

The New York-based band members all have Colombian roots, and this shines through everything they do, but additional transnational ingredients forge a modern diasporic combination that is also psychedelic, electronic, funky and often highly danceable, with pinches of dub, electro, punk, metal, trance, and reggae added to their Afro-Colombian folkloric and popular musical stew (the essentials being cumbia, porro, champeta, fandango, bullerengue and mapalé). This visionary Latinx quartet is also highly visual, from their live performances that often incorporate a constantly morphing psychedelic video and light show to the always beautiful album art adorning their recordings and even the colorful Afro-Indigenous-futuristic space costumes they wear.

Through their debut EP and two subsequent full-length albums Combo Chimbita have lyrically traced a consistent occult mythology that addresses themes of traditional indigenous and African lifeways, infinite cosmic mysteries, love, loss, and the wonder of natural life forces like plants and animals, storms, volcanoes, water and fire. All this is filtered through the modern urban immigrant Latinx experience of the band members’ daily existence in these currently trying times, which creates a thrilling tension between contrasting realms. Digging a little deeper, according to the band, their second studio album (produced by Daniel Schlett of The War on Drugs and Modest Mouse fame) draws from “ancestral mythologies and musical enlightenment to unearth the awareness of Ahomale, the album’s cosmic muse.”

Ahomale is a Yoruba term meaning “adorer of ancestors” and after playing together for four years, and working up the tunes on this record, the band has reached such a level of communication that the energy they generate between them has become a life force of its own – “àṣẹ” or ashé in Yoruba terminology – that is passed on to the listener and then looped back in concert, much like the way traditional societies pass down the wisdom and spirituality of the ancestors to new generations through call and response, storytelling and ritual.

As Chimbita bassist/keyboardist Prince of Queens asserts: “The more we’ve played music together, the more we began to discover things within ourselves that we were previously unaware of, almost like an energy. And that’s being communicated through our music,” which brings it back to what guitarist Niño Lento refers to as “the protagonist of this album.” That’s because Ahomale is also a character, a being “who possesses the ability to communicate ancestral wisdom through the music” much like the band do on the record. According to Oliveros, a central element of this is “the search for spiritual awareness, which ultimately serves as a revelation” to illuminate the darkness which all of us are struggling through in this life where we question what is real and what is not.

With this recording Combo Chimbita have created not only a world with its own cosmo-mythology and ethos but also a vivid and compelling central character that Oliveros reveals “is a warrior, not the sword and shield type, but a woman who is ready to listen to her heart, follow her intuition and connect with her ancestors” to seek the truth about herself which ultimately will make her stronger. In other words the album is about a spiritual journey that guides us, via the wisdom of the past, towards a future where our reality will be the truth we have always had (referenced in the track “Testigo” and the album’s bouncy lead single “Esto Es Real”). This revelation, strengthening us from within and enabling us to carry on, will shine brighter than gold (see “Brillo Más Que El Oro [La Bala Apuntándome]”), as does the entirety of Ahomale from start to finish.

Ahomale is released by ANTI- Records and available from Bandcamp.