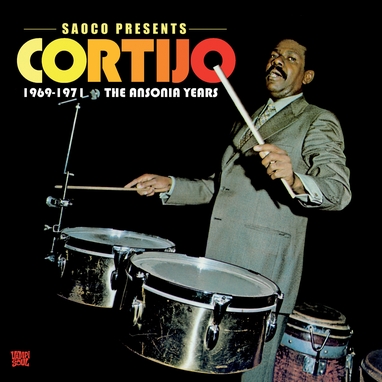 The legend says that Rafael Cortijo Verdejo’s parents disciplined him many times when he was a child because the only thing he wanted to do was to play his bongo during the street parties in the Santurce (or Cangrejos) neighbourhood of San Juan de Puerto Rico where he lived. However, if bomba and plena music have risen to become part and parcel of the Caribbean cultural heritage, the credit arguably goes to that headstrong child, who later grew into one of the most significant artistic figures of his country. The Puerto Rican composer, orchestra leader, bongocero and conguero liberated those styles from their shanty town and slum origins to transform them into a universal expression of the Caribbean island tradition.

In the last decades, the success of salsa has moved bomba and plena to the background. Yet despite this, these styles have recently enjoyed a revival which has inevitably celebrated Cortijo ‘s work. From the 1950s till the 80s, the musician and his ensembles led the dance scene of the ‘isla del encanto’, spreading Puerto Rican vibes all around Latin America as well as North America. It was at the end of the 1960s that Cortijo’s popularity made a leap in quality. His tunes helped him to emerge as a caribeño cultural ambassador in the US and, after moving to New York, the large Puerto Rican community of the Big Apple became his second house.

It was indeed in New York where, in 1969, his most significant project came into being. Cortijo, with the help of percussionist and friend Francisco “Kako” Bastar and singers Rafael “Chivirico” Dávila and Ismael Rivera, decided to go back to the basis of Puerto Rican tradition and rediscover its purest sound and identity. Together, they got rid of all the extra orchestration and flamboyant arrangements which were beginning to characterise Latin American ensembles and recovered the most genuine music expressions of their island. Cortijo’s idea was indeed to “recreate in the studio the drumming fiestas he enjoyed as a boy in the Santurce neighbourhood”. It was that musical ideal that Cortijo and his fellow musicians realised in the following two years.

The proof is documented here in The Ansonia Years (released by Vampisoul Records), which collects and invigorates what the Puerto Rican legend recorded for the seminal Ansonia label in that two-year-period. However, despite their 45+ age, the 16 tracks included on the collection sound like cutting-edge Latin ballroom floor-fillers thanks to their irrepressible percussive energy, genuine expressiveness and the straightforward remarkable musicianship of their interpreters. The performers not only honoured their traditions but also explored the link between their Puerto Rican roots and Cuban repertoire. They delve into the Caribbean rhythmic-centred attitude, to find a leitmotiv able to bond the sound of the two islands.

In fact, the Ansonia Years’ album represents island music at its earthy and joyful best. It is a triumph of Afro-Caribbean drumming with plenty of bongos, congas and timbales, further enriched by the contribution of the exceptional Cuban pianist Javier Vázquez and vivid vocal colouring. If you want to listen to how a traditional Caribbean music collection should sound, don’t look any further and immerse yourself in the pure plena sound of “A La Verdegue” and “La Madama”, energetic bomba of “Dorotea” or guaguancò with a lost love theme of “Tu y Tu Guarapo”.