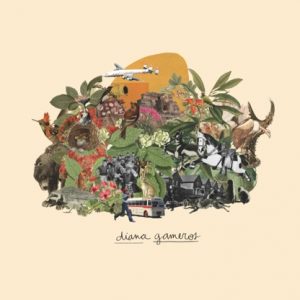 She sings “to life and to the sun. To the challenges, to fluency, to fear, to hope and to anxiety. To the colours, to the borders, the documents and to the wanderers. To the wind and to love. To the I can’t, to the ‘is it possible?’ and to the ‘all will go well’. To the people. To Mexico and to the light.”

But, first of all, she sings to her people and for the people like her: immigrants, exiled, inhabitants of a foreign land. She sings with a suave voice and a Latin guitar which identifies, in a trace, her origin. Diana Gameros is one of those Mexicans who decided, willy-nilly, to move across the border and enrich the States.
Despite that she’s now based in San Francisco, she’s still unable to forget the place where she comes from. That wretched and desperate city known as Ciudad Juarez, which is still monopolizing her feelings and worries.
“En Juarez” is indeed the first chapter of her first long-awaited album: Eterno Retorno.

The work, which has been published thanks to a Kickstarter project, has been recorded with the support of some of the most interesting names of the San Francisco scene like the talented Patrick Wolff, who plays the clarinet, the saxophone and is the arranger of the opera. Or like Ara Anderson at the trumpet, Andrew Maguire who takes care of the percussions and Minna Choi: the orchestral director and arranger.

It’s a record which moves from Gameros’ acoustic guitar and reaches distant musical territories. Including nine original songs, fruit of her songwriting skills, and one music transposition of a Claude Bourine poem (“Peut-être”), the opera extensively wonders about hope and homesickness, love and anguish. It is an emotional tribute to the artists’ troubled Mexican roots, but it doesn’t feel sorry for itself, it never cries: it looks forward to get stronger and keep fighting.

Also the music influences reflect the dual soul which lives in Gameros. Eterno Retorno sounds Latin pop (“Enough”) and folk, it sounds huapango (the traditional Northern Mexican style) and experimental (“SB1070”), bossa nova (“I Begin”) and easy listening (“Libre e Serena”). It sounds English, Spanish and French and, above all, it is the sound of a community: the San Francisco Bay Area’s one in which Diana Gameros today lives and to which she’s become devoted. As she has directly explained, her work is the reflection of her journey “as an immigrant woman, as an inhabitant of strange lands, as an explorer of foreign languages, as a lover of light, of movement, of justice, of nature, of family and of everything that is alive and part of this existence”. Features which has already made her a unique artist and a rising voice of the “Área de la Bahía” scene. Features which can also help her to finally become prophet in her own land.

Eterno Retorno is available from dianagameros.bandcamp.com