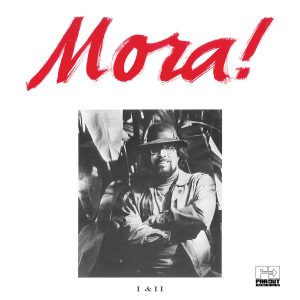 We can consider Francisco Mora Catlett one of those responsible for putting Latin spice in the elaborate art of jazz. Sun Ra observed all his power when he invited him to be part of his Arkestra. The same happened with Max Roach. But before joining these legends, he received all the knowledge of two great Mexican artists of the 20th century: Francisco Mora Sr. and Elizabeth Catlett. At home, with his parents, Mora Jr. developed his artistic skills.

Born in Washington DC in 1947, the drummer was raised in Mexico City, where he started working as a studio musician for Capitol Records. Then, in 1970, he joined Berklee Music College to study composition. Three years later, Francisco returned to Mexico to transform the local cultural movement, but his destiny was to put more sway into a global musical genre, which despite being rooted in African American culture had few percussive elements, for various historical reasons.

After diving into the deep afro-futuristic waters of Sun Ra Arkestra, Mora Catlett settled in Detroit and self-released his first solo LP, Mora!, Released in 1987, he followed it up by recording another album with an expanded Detroit jazz brass section but this album would be shelved for decades. Fortunately, Mora! I is now published again by Far Out Recordings, with Mora! II getting its first ever vinyl release. Both use the spirit of drums to guide rhythmic cells of African music. It is incredible how Mora manages to keep the cadence of classical jazz and its improvisations, and synchronize it with the swing of salsa and rumba congas, frantic drumming that is directly related to the music that accompanies Afro-Brazilian religions (candomblé, macumba, umbanda) – much explored by Naná de Vasconcelos and Airto Moreira – and also manifestations that originate in Cuba and Haiti. The influence of Brazilian samba is also present, as well as small doses of bossa nova (mainly in the way Teresa Mora does the vocals) and, of course, the warm sound of Mexico.

Across two LPs, the work has unity [this is more evident when listening to the sequence in the digital version]. There is much intensity in the three versions of “Afra Jum” – all very powerful and each with its own cadence -, as well as “Rumba Morena” and “Samba de Amor”, but there are also reflective tracks like “Cultural Warrior ”and “El Moro”. It is possible to feel the passion that Franciso Mora Catlett intends to transmit to the listener through his Afro-futuristic and pan-African vision. After more than 30 years, the productions are still very current, showing that Mora was way ahead of his time. For this reason, this work sounds as modern as any other jazz album from 2021. A rare piece, which deserves to be studied and appreciated carefully.

Mora! I and Mora! II are released by Far Out Recordings