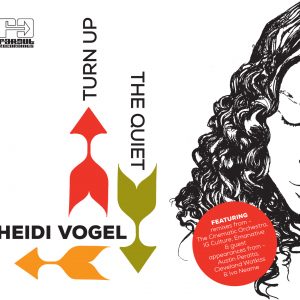 Slowing emerging from the misty opening chords of ‘Medo de Amar’, the first track on Heidi Vogel’s debut solo album Turn Up The Quiet, comes the awareness of a presence, the merest breath of a female vocal. The singer’s remarkable voice is a gentle ripple on an empty lake, barely breaking through the surface yet at the same time penetrating to its furthest edges, and it brings with it the realisation that this is going to be something special.

Turn Up The Quiet sees Londoner Vogel, best known as the lead singer in The Cinematic Orchestra, reinterpreting a selection of Brazilian folk, jazz and soul tunes in a record of mesmeric guile that is, by turn, exquisitely delicate, achingly mournful and stirringly passionate. It is an album in which less is definitely more, with several songs laid bare over the refined elegance of Josue Ferreira’s guitar playing, and stretched out chords that create chasms in which Vogel’s husky refrains echo, shimmer and soar.

Vogel is completely at home singing in either English or Portuguese, and song titles such as ‘Copacabana’ and ‘Chelsea Bridge’ emphasise her two main geographical influences. Her resonant love for Brazilian music is interwoven with the eclectic verve of her home city and Vogel’s divine talent bridges these cultures. Her voice is a flickering murmur that ascends in fervour, and Turn Up The Quiet draws you indelibly into its smoky, enthralling cocoon.

There are songs here which utterly enshroud the listener in their beguiling composition, such as in the haunting melancholy of ‘Black Narcissus’ or the mellow seductiveness of ‘Inútil Paisagem’. It’s hard not to slip away into the void as the album sways its way through the likes of ‘Love Dance’ and ‘Bonita’, songs of deep, mellifluous romance whose alluring clarity nevertheless brim with eroticism. Things spark up with the delicious ‘The Frog’, built on a classic bossa nova-laced melody and the dynamism of Vogel’s vocal range.

In spite of ‘The Frog’s’ relative vigour, by the time you reach ‘Dindi’, the eleventh song on the album, you’re probably long lost in a black hole of idealistic serenity brought about by Turn Up The Quiet’s graceful remoteness and mellow temperament. So it comes as something of a jolt when out of the vortex cranks something different altogether. A blast of electricity, sounding so unusual in texture, leaps out like a red flash in the darkness, and Turn Up The Quiet turns up the quiet, swinging on its axis and embarking on a quite unexpected finale.

The dactylic essence that suffuses the album’s hitherto captivating aura is set aside for a finale that sees three remixes which enter the realms of electronic beats and trip hop. The first of two ‘Black Narcissus’ variations, remixed by IG Culture, samples Vogel to deliver a vocal melody that is sliced and dissected over a falling string hook. The second, rejigged by Vogel’s Cinematic Orchestra comrades, brims with the trademark nu-jazz beats of the group and, more reminiscent of the original version, is the more appealing of the two. By the time the eponymous ‘Turn Up The Quiet’ arrives, we’re almost getting into tribal house territory, so dramatic is the shift from the majority of what’s come before.

It is a brave move to tag these electro experiments onto the album’s tail end, as the switch is potentially alienating to the listener and doesn’t always engage musically. But it emphasises the singer’s exploratory nature and ensures that, while Vogel operates in a different league, Turn Up The Quiet will never be appropriated by the Norah Jones coffee table crowd, always greedy for soft-mood concept records to absorb into its vacant appetite. The surprise that concludes Turn Up The Quiet doesn’t always work in the aesthetic context but, with its inventiveness and courage, it warrants inclusion.

Vogel’s brilliant vocal diversity, so vivid in two languages, marks her out as a rarity amongst British musicians and her solo debut dazzles in its meticulous delivery and slow-burning yet resoundingly bright fuse. This is by and large an excellent album which pays tribute to both the retro Brazil sound and the UK underground scene, dipping into its own, self-created identity to take the listener somewhere that is both far away and reassuringly close.

Turn Up The Quiet is released by Far Out Recordings and is available from Amazon and iTunes.