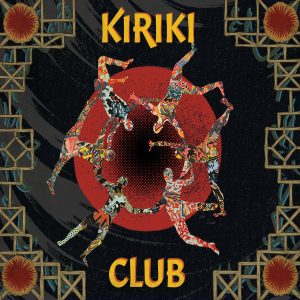 On a casual first listening, this band from Birmingham (that’s England, not Alabama) sounds like Hot Club of Cowtown might have doubled in size and packed their bags for a tour of the world. Having wowed ’em at festivals and sold out a tour of the UK, they’re now adding their debut album to the musical picnic hamper. Since they revel in the drama of tango and appear to stop off in Texas, Mexico, Cuba and Portugal during their whistle-stop global tour, it’s right and proper to bring this dotty album to the attention of our readers.

There are six club members, who bring to the show their individual musical talents and diverse backgrounds in clowning, theatre, dance and the like. Unsurprisingly, there’s a strong element of theatricality in the music; on occasions, a tad too much perhaps. But this is a troupe that sounds like they were born to perform. Alas, show business is no business right now, which makes the album a timely release. The basic instrumentation is bass, drums and percussion, guitar, woodwinds and vocals, but versatility is the name of their game. Sam Frankie Fox, their splendid vampy vocalist, sings convincingly in Portuguese on the Fado number, “Tenho-me Persuadido”, and the choro-inflected “Insisto”, as well as French on “Monsieur” and Spanish on the Tejano-cum-Rockabilly version of “Mi Corazón”. Heavens, she and her cohorts even re-imagine a Welsh anthem, “O Gymru/Ar Lan Y Môr”, in Welsh – and just about get away with such audacity. There’s an undercurrent of tango’s drama in the band’s appealing first single, “That’s Where We Are”, and in the cod melodrama of “Waiting For You”.

There are 101 musical influences at work here and it can set your head a-spinning to try to get a stable foothold on what’s going on, but they do what they do very well and they do it with sufficient verve and vivacity to make this a very entertaining jamboree. With repeated listening, it strikes me that the band would be perfect for a party to celebrate a key wedding anniversary. If you can’t afford them, the album will do quite nicely.

Kiriki Club is out now

Or That’s Where We Are”: https://www.youtube.com/watch?v=zqVBF6bkg3w&feature=youtu.be