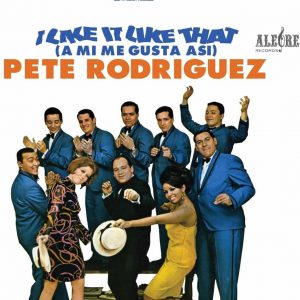 The name Pete Rodriguez will be forever synonymous with the title track that kicks off this explosive album with such a resounding bang. It was and still is probably the most instantly recognisable slice of Nuyorican boogaloo: covered, re-mixed, sampled and sound-tracked ad nauseam. Nevertheless, despite the efforts of groups like Spanglish Fly to revive the genre, boogaloo is sometimes dismissed as a passing fad – the Latin music industry’s attempt perhaps to exploit something with the commercial potential of Motown – and consequently Pete Rodriguez has been somewhat sidelined in the pantheon of the era’s true greats. Not quite in the same league as serious big-hitters like Eddie Palmieri, Ray Barretto or Tito Puente.

The new video [above] for the title track that accompanies the album’s re-release spells out what it’s all about – and that is not contemplation. Originally released in 1967 at the height of the boogaloo craze on the Alegre label (before it was subsumed under the mighty Fania empire the following decade), I Like It Like That was the Bronx-born piano-playing bandleader’s fifth album. While geared entirely towards dancers, it’s no mere attempt to cash in on the single’s success. There are only two other pure boogaloos here: the faux-live “Micaela”, which kicks off the second side, replete with whistles, shouts and double-time rap-o-clapping typical of the genre, and the frantic “Soy el Rey”, which ends the album as it began – with the kind of percussive delirium that makes it impossible to keep still. “What a groove!” as our man in Spanish Harlem proclaims during the title track’s four and a half minutes of pure Latin gold.

Elsewhere, the music transports you back to the golden age of mambo and cha-cha-cha, when Machito, Tito Puente and the Palmieri brothers were knocking them dead at venues like the Palladium. “El Hueso”, for example, with its terrific trumpet and piano solos and rousing vocals throughout, is a lovely loose-limbed jam. “Pete’s Madness” is every bit as wild and bonkers as “Joe Cuba’s Madness” of 1972. Taken at a frightening lick, the demented conga and bongo playing, the funky piano and the urgent call-and-response of the braying brass all demand undivided attention. “3 And I”, another fast and furious mambo, features the leader’s hard-hitting piano and “Si Queres Bailar” may just be the best thing on the entire LP. There’s no let-up throughout. I Like It Like That takes no prisoners and one can only share the critical assessment of its creator: “Ahhhh, am I feeling good, man!”

I Like It Like That has been reissued by Craft Recordings, as part of its Fania series, on 180-gram vinyl