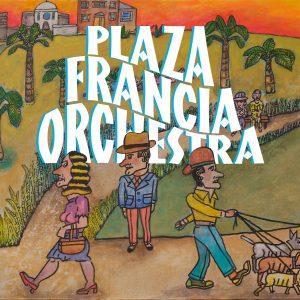 Hearing how Plaza Francia have evolved in just over three years since their debut, A New Tango Song Book, is a little like seeing how a talented film director can take a promising stage play and open it out for the big screen to create something more rounded and artistically more satisfying. For a start, Chistoph Müller and Eduardo Makaroff of Gotan Project fame have transmuted their spin-off band with the help of some of Paris’ finest young tango musicians into an ‘orchestra’. As the official video for the catchy single “Te Prohibo” (below) caricatures, the erstwhile imaginary promenade around some of the airier attractions of Buenos Aires now wanders off more into the seamier demi-monde of the Argentine capital. It’s smouldering, exhilarating tango nova with the emphasis on dancing cheek to cheek.

As fabulous a creation as Gotan Project were – and live they seemed sometimes indeed the work of a film director – you always knew roughly what you were getting. This latest incarnation, however, likes to surprise and unsettle. “Dedos de Oro”, a stunning opener – with its atmospheric interplay of vibraphone, acoustic bass, bandonéon and subtle percussion ushering in the string section – and “Cábala” and the irresistible “Clase de Tango” all chart fairly familiar territory. But then both the title track and “Arrebato” (complete with drum machine, no less) inject a funky club-land twist into the proceedings, and the jaunty “Paraíso” conjures up an unlikely collaboration with Madness.

Tablas add Middle Eastern colour to “Tranquilo”, a showcase for the talents of Maria Muliterno, the new vocalist discovered singing on the streets of Paris. Although she handles most of the vocals, there are guest slots for Lara, the Cape Verdean star, and Catherine Ringer, the charismatic former focal point of the unclassifiable French band, Les Rita Mitsouko, whose dramatic voice stood out on this album’s predecessor. All in all, there’s never a dull moment here.

According to co-leaders, Müller and Makaroff, “that’s one of the reasons we’re doing Plaza Francia Orchestra, because we see that the times are dancing to tango. We want to make all those people dance”. Well, as the late-lamented advert once suggested, “You know when you’ve been tango-ed”, and even a cursory listen to this moody and rather magnificent new album leaves you in no doubt whatsoever. With dance schools apparently springing up all over the world, we have to hope that the Orchestra will deliver their next offering a little more promptly – before we tire of the tango.

Plaza Francia Orchestra is released on Because Music and available on various platforms.