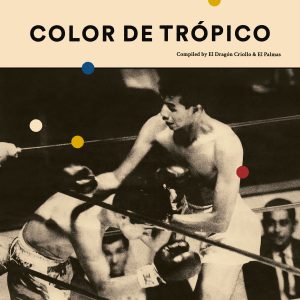 One man’s passion became the same man’s label. Now based in Barcelona, El Palmas is described as “an intertropical South American DJ and selector”. His label may not have been in the crate-digging game as long as Vampisoul over in Spain’s capital, but he and label-mate El Dragón Criollo have put together a very wacky compilation of Venezuelan sounds released between 1966 and 1978, an era when democracy was in its infancy and the impact of the filthy oil industry had only just begun. El Palmas’ credo is to bring back “unfairly forgotten or undiscovered artists” and that’s just what these eight numbers do. At 27 minutes, it leaves you wishing for more, but let’s be thankful for the little marvels on offer on both sides of this record.

The first side kicks off with Los Darts’ “El Despartar” (or “The Awakening”), the popular group’s last single before calling it a day in 1974. Its sweet vocals and bossa beat evoke early Marcos Valle and a film clip of sun-kissed young lovers staring dreamily into each other’s eyes when they should be looking at the road ahead. Hugo Blanco’s “Guajira con Arpa” is a deliciously weird concoction featuring mariachi-style trumpets and an Andean harp. La Retreta Mayor’s “Zambo”, with its gruff tenor sax soloing over a big band arrangement, could be a Quincy Jones score for a detective series set in Caracas. El Combo Los Capri’s clarinet-and-accordion-led “Gaita Universal” rounds off the first side in a more traditional way. Nelson y Sus Estrellas’ “Fantasia Latina” is an eclectic guaguancó in search of a piano tuner.

The riotous, histrionic “Socorro, Auxilio” with its imploring vocal by the enfant terrible of Venezuelan popular music, Germán Fernando, is (kapow!) like the musical equivalent (oooff!) of a TV Batman fist-fight. By complete contrast, Grupo Almendra’s “Tu y Yo” is a synthed-out slice of… what on earth? Psychedelic soft jazz leaning towards funk-rock? Which leaves us with Tulio Enrique Leon Y Su Organo. The blind organist turns Bimbo Jet’s Eurodisco “El Bimbo” into “Bimbom”, a quirky tinkling cumbia for tropical tea dancers and a suitable conclusion to a collection that’s sometimes glorious, sometimes excruciating and always about as far out of left field as it’s possible to get.

Color de Trópico is out now on El Palmas Music