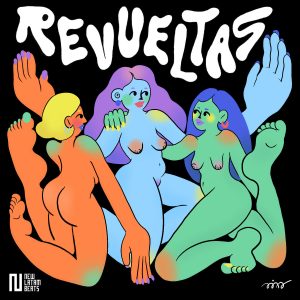 From digital folklore to pop music, New Latam Beats is back with another compilation showcasing the freshest music from Latin America. Revueltas is a compilation series that brings together some of Chile’s finest electronic female and non-binary artists, assuming a political statement of equality and representation that is in tune with a social shift in the country that began in 2018 and is now seeing some hope with the writing of a new constitution and a change of administration, moving from the right to centre left.

For this new chapter, the label has put the executive production of the album in the hands of Carla Valenti, a well known DJ and producer who came up with the compilation’s concept: “the desire to have this space, to be able to visualize the work of the women of Chile, which I find to be all rich and which I greatly admire. I think that each one separately has inspired me at some point in my life”, she says. One of the tenets that defines her artistic curatorship is diversity.

The first volume of the album is close to the label’s usual output, with folkloric roots on the opening track from Brava, a downtempo producer from the La Araucanía region in the south of the country. Halfway between there and Santiago can be found Niñosindigo, from Concepción, who explore the Afro-Latin influences of current urban rhythms with a raw and distorted track, “Agaricales”. Nea Ducci, Sofía Oportot and Entrópica deliver signature electropop, while Ignis Natre, Madela, AlegriAle and Cholita Sound add the flows and rhymes that prove that Chile is a land of poets.

Opening the second volume is Manu Ela with “Así”, a deep pulsating rhythm with dub influences. Techno is also explored on this compilation, with familiar names like Valparaiso-based Alisú, Andrea Paz and Kamila Govorcin, alongside underground faces such as Alex June and Ochi, who incorporate house and breaks elements respectively. Adding experimental noises are the northern duo Les Freetangas, from the Coquimbo region.

In summation, this eclectic collection is a small sample of the talent coming from Chile, a perfect example of diversity and a love for the craft that is also focused on fighting for better conditions. Equality and equity is not just a slogan to be used during certain days of the year, it should be a way of doing things properly when building any community.