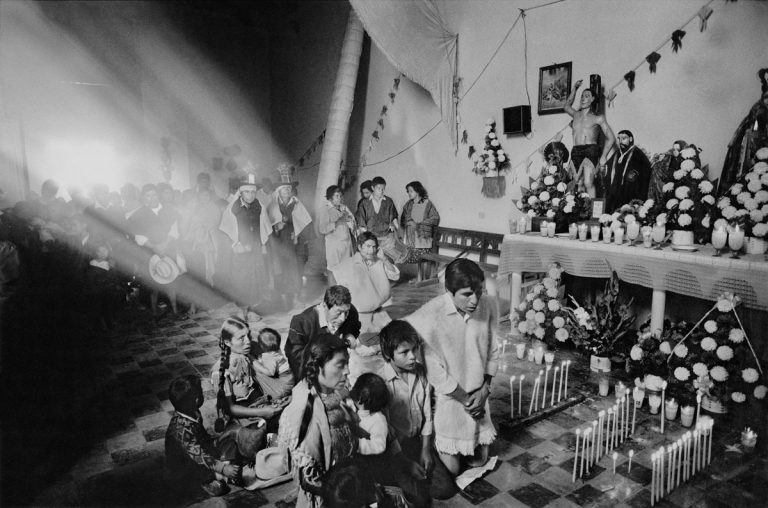 Breathing Through ‘The End of Silence’: A Review of Antonio Turok’s Photography

Eastern Projects Gallery has brought renowned documentary photographer Antonio Turok to the city of Los Angeles. The series of photographs featured in The End of Silence (October 9- November 27, 2021) span a period of 40 years in which Latin American Indigenous cultures prove that their fundamental core of existence is communal and community-orientated. Graphic images of death and life are wrapped around war, struggles for self determination, rebellion, revolutions, suffrage, loss and hope. Turok’s exhibition carries the turbulent history of Indigenous and mestizo communities. Despite attempts by modern states to eradicate millennial Indigenous epistemologies and cosmovision(s) they continue to thrive and/or survive under extreme institutional/state-sponsored violence 40 solar years later.

For Chicano owner and director of Eastern Projects, Rigo Jimenez, this exhibition is “iconic and truthful to Mexican and Latin American realities”, with Jimenez adding that: “people need to see why people were leaving. Forty years later people continue the exodus!” Through the 1970s and 1980s revolution and social crises in Central American countries forced many to migrate to the U.S. Several of these countries were governed by conservative right wing governments, military juntas and oligarchies with the full support of the U.S government. By the early 90s neoliberal economic policies in Mexico and Latin America would generate another wave of migration to the U.S. Asymmetrical Trade deals like NAFTA (1994) which benefitted U.S and Canada more so than Mexico contributed to the impoverishment of peasants, workers and families. Neoliberal policies brought the deterioration of state social services and workers rights across the continent. Land appropriation by the bourgeoisie and the shift from traditional agriculture to transnational agribusiness increased internal tensions in Latin American countries.

In a 2017 interview Turok posed a question: “Have we really learned anything from history?” Perhaps the answer can be yes, with the exception that there are many actors in charge of dismembering truth. The promotion of clearing out truth from lies is what makes Turok’s work valuable for all generations and people from all walks of life. It is a daring act to come face to face with an unknown reality especially when it questions our perception and our indoctrinated beliefs. His medium of choice of black and white photography removes the distraction that comes with color photography. It allows Turok to present the rawness of the present world order, his composition seeming to come second to the visual narrative drama captured in his photography.

What stands out in The End of Silence is the will of life as an act to no longer live in silence. Turok finds spaces in the images where memory becomes stored energy. To recollect experiences in film emulsion in order to engage in conversation with the present is crucial for Turok. For a city like Los Angeles this exhibition is very relevant. The city holds one of the largest diasporic populations of refugees/immigrants and first born generation U.S citizens from Central America dating back to the 80s and 90s. It is a relived memory brought by a Mexican photographer to the doorsteps of L.A.

In “Widows of Guatemala”, taken in 1989, every square inch of the image is occupied with the presence of Mayan Guatemalan widows who endured violence, rape, and the loss of loved ones during the civil war. Despite its beauty, it is a shivering photograph. The civil war in Guatemala between the military dictatorship and peasants, children, workers, elders, students and indigenous communities was one of the bloodiest of Latin America. For scholar Susanne Jonas in The Battle for Guatemala: Rebels, Death Squads and U.S. Power, the displacement of peasants and the appropriation of communal lands by the elite with the aid of U.S was the direct cause of Guatemala’s civil conflict. Over 440 villages were entirely destroyed. Jonas describes the scorched-earth polices as genocide and a covered-up holocaust. The title of this image hints to the tragedy of war, in particular for women and especially if they’re Indigenous. If interpreted as past tense we lose the significance of Widows of Guatemala, hence acknowledging the suspended closure and mourning which continue to this day. Despite moving forward in life, the hurt and trauma is a new tenant in the heart and mind of many in Widows of Guatemala. It is a silent hurt as an invisible scar. Regarding the dismembering colonial practices towards non western cultures in Something Torn and New: An African Renaissance, writer and scholar Ngũgĩ wa Thiong’o poses the following questions: “What are the consequences of lack of mourning?” “How does it impact or disrupts the collective experience or those involved?” These are fitting questions to be examined by all of us. Turok’s work is a visual interpretation of Eduardo Galeano’s book, Open Veins of Latin America. Hence, the presentation of this series is a “construct of memory built to […] ‘bring into appearance’ a community historically neglected, un-acknowledged and discriminated against”.

What can we extract from Turok’s exhibition other than the drama in this body of work?

Besides an aesthetic consideration this selection of photographs consists of accumulative historical moments that circumvent between the past and an unknown future. What arises is the dialogue between two thinkers, W. E. B. Du Bois’s “the problem of the 20th century is the problem of the color line” hence racism, and Jose Carlos Mariategui’s argument of the Indian problem as “the land problem”. Both of their arguments can be traced back to the early years of colonization in Abya Yala (Latin America).

Upon the signing the of the North American Free Trade Agreement (NAFTA) the Zapatista uprising in Chiapas, Mexico in 1994, drew the world’s attention to the perverse logic of domination by a modern colonial system against people from the Global South. Images of anti-imperialist and anti-capitalist Zapatistas circled the planet by surprise. In other words they were and continue to be the first responders “denunciating the New World Order from that order’s victims.” In Tom Hayden’s introduction to The Zapatista Reader he writes, “Who were these masked and multicolored Indians with makeshift weapons?” The Zapatista’s proyecto de vida (project of life) against los malos goviernos is sealed in many of Turok’s images. He captures the muscular solidarity behind the rebel group. Turok decompresses the lived experiences from the confinements of a time capsule that would otherwise be lost in space orbiting in no direction. His gentle click on the camera forwards, “from a real body which was there, proceeds radiation which ultimately touches me who am here” (Camera Lucida by Roland Barthes, p. 81). Hence, Turok’s direct presence as a witness to the many struggles. The spirit in several of the images is one that cannot be at rest, it interrogates “US” in the present. We can add that Turok’s photo documentation consists of ‘thinking images’ charged with feelings and emotions.

In “Subcomandante Marcos, montañas del sureste”, from 1994, the Zapatista mestizo poet rebel leader is pictured sitting on a log next to a tree with intertwined hands in deep thought accompanied by Zapatista guerrilla rebels. The background is a dense jungle covered in clouds. El Sub is etched with the transmission of light in the same likeness as Auguste Rodin’s bronze sculpture, “The Thinker”. Except Subcomandante Marcos is not alone nor is he nude, he is in the company of a straddled bandoleer across his chest full of rounds in a jungle that offers him and the rebels support and love while the mist of the clouds descends from the heavens to blanket the rebel Indians with protection.

In 1992 while some celebrated the 500th year discovery of Las Americas thousands across the continent protested and celebrated 500 years of resistance to western colonization. Turok would capture with a click “The Collapse of Don Diego Mazariegos”, a bronze monument of the conquistador of Chiapas, Mexico that same year. Until then the colonial monument like many others of conquistadors, Don Diego Mazariegos represented “a conversation of we don’t belong together”. Upon impact on the ground the bronze sculpture’s head came apart. It would soon be carried across the town by the locals.

The most subtle image in the exhibition is also one of the most striking. The scene at “Church of San Andrés, Sakamch’en de los Pobres, Chiapas” (1994) [pictured at top of page], a silver gelatin print smokes the dramatic sunlight rays with incense. The sun draws directly upon the body of the poor. They kneel worshiping perhaps with the same humble devotion and veneration as did many of our past ancestors prior to colonization. Cempazuchitl (Mexican marigold), candles, saints and bows adorn the inside of the church with a dynamic aura of quietness. To paraphrase Susan Sontag, It is an image that strikes your skin like a delayed ray of a star.

The consistency in Turok’s photography brings to mind scholar Hugo Zemelman. Zemelman discussed the need to first acknowledge what determines and does not determine our circumstances. Second, whatever does not determine us is what allows us the space to understand “El Hombre” as a creator or a constructor of the new. In other words Turok’s images challenge modernity’s deterministic attitude towards the poor, people of color and the Global South.

The silver emulsion in Turok’s black and white photography, unlike digital, carries the mystic silver rays of Tonanzin, the moon goddess of Mesoamerica. It is what allows his work to glow out of darkness.

We can best describe Turok as a brujo (wizard) who traps the soul and life of many in this body of work with his camera. He merges with his obsidian black camera to Mictlan the dark room to bring back to life testimonies that could otherwise go unaccounted. In this journey to Mictlan, Turok carries with him the spilled blood and the dust of hope. Every so often he releases the energy of these photographs in spaces known as galleries and museums as a soul cleansing ritual for all to engage in. The energy as resurrection then walks amongst the living whispering their unknown stories and testimonies of cruelty and challenges. Like Juan Rulfo’s novel Pedro Paramo it is the lifelike aura of the dead as storytellers in much of his work that haunts the present. In the first sentences of Pedro Paramo the dying mother pleads with her son to not ask his father whom he does not know for anything, “just ask for what he owes us.” The silent co-authors of The End of Silence do not ask for anything, they fight for what is owed to them; dignity, justice and peace. They fight against the very same system and people who have deemed them as backwards culture and useless for modernity.

Note: To schedule Antonio Turok for a lecture (zoom or in-person) on his brilliant black and white photography at your organization or campus, contact Dr. Huerta at [email protected]