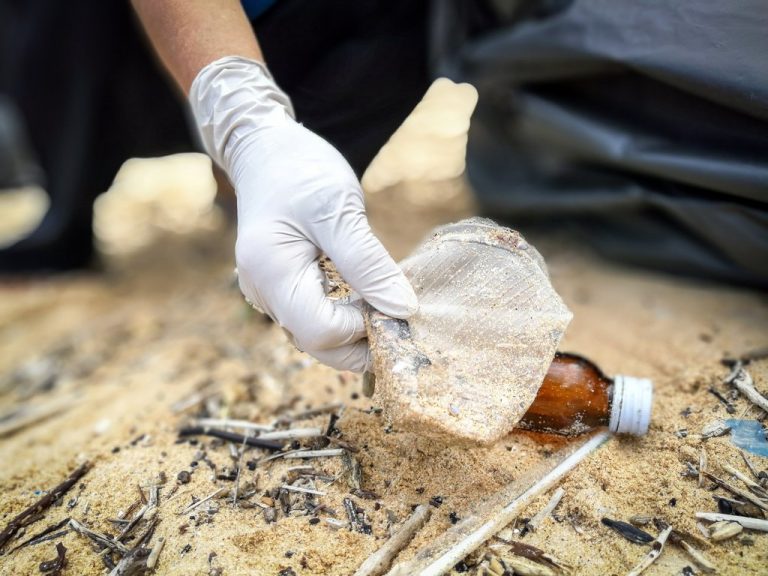 Farm Fresh To You

In Tumbes, a village in southern Chile, discarded plastic fishing nets are crammed into gaps between parked cars and market stalls, evidence of a global waste problem that the town is working to resolve.

Until recently, most discarded fishing nets in this coastal fishing village were dumped straight into the sea – contributing to the massive plastic pollution crisis that’s choking the planet’s oceans.

“If you have a broken net, you throw it anywhere you can,” says Ramon Maldonado, a fisherman in Tumbes.

But a startup called Bureo – founded by three North American surfers – is collaborating with fishermen like Maldonado to keep hundreds of tonnes of discarded nets out of the ocean each year.

Nets are sorted, cleaned, and cut in Bureo’s warehouse in Concepción, a city a few miles from Tumbes. Here they are turned into 100% recycled polyester and nylon pellets, called NetPlus, which are sold to companies as a sustainable alternative to first-use plastics.

Bureo joins dozens of initiatives addressing an urgent environmental question: how do we tackle our ocean plastic problem? And can we do it without reducing plastic use?

While it is challenging to gauge exactly how much plastic has accumulated in the world’s oceans, an estimated 8m tonnes of new plastic pollution enters oceans every year. The oil industry is investing in a huge surge of plastic production, which is expected to grow by 40% by 2030. Studies have also shown the proliferation of single-use plastic is accelerating climate change through greenhouse gas emissions at every stage of its lifecycle.

If current trends continue, by 2050 there could be more plastic in the ocean than fish by weight, according to the Ellen MacArthur Foundation.

Northern Point, Girlfriend Collective and Rothy’s are all budding companies producing clothing entirely from ocean plastics. Larger brands such as Nike, Adidas and Fjallraven have also launched garments from recycled ocean plastic. And to change the topic slightly over companies are looking at desalination as a way of solving the water crisis.

The plastics industry has long pushed recycling as the solution to pollution. In reality, less than 10% of the plastic produced in the US each year is recycled. This is in part because it is hard to make recycling initiatives profitable, as Bureo learned firsthand when they tried to produce sustainable skateboards in 2013.

“Ocean plastic is not one type of plastic that can be used for high-value products, it is mixed and degraded and needs to be separated,” says David Stover, who founded Bureo alongside Ben Kneppers and Kevin Ahearn.

Durable products need to be made from quality substances. Wading through masses of ocean trash and sourcing key material is time-consuming and financially draining.

The company met with scientists and coastal communities in Chile to vet different materials. They found that rather than smaller plastics such as bottles and six-pack rings, coastal communities were particularly burdened by fishing nets piling up on beaches.

Nets account for 10% of the ocean’s plastics, according to a United Nations report. Heavy and cumbersome, they choke land mammals and pollute sea beds and beaches. And fishermen in Chile were desperate to get rid of them.

“It was a burden and they had no solution for it,” says Kneppers.

Kneppers spent two years living in Chilean coastal villages, working directly with fishermen to flesh out how to collect and process the nets. Bureo compensates artisanal fishermen for their collaboration, while industrial vessels can earn environmental certifications by participating.

“Replacing virgin plastics in the market with recycled materials is important to get to a circular economy,” says Luisa Santiago, who leads Latin American operations at the Ellen MacArthur Foundation. The ultimate goal, she stresses, must come from solutions that eradicate waste production, rather than rely on it. “We can’t recycle our way out of the problem.”

In the meantime, Bureo is making a dent in Chile’s net waste problem. The Concepción facility processes 800 tonnes of nets annually, clocking 2m lb of recycled raw plastic to date. They reached profitability in 2019.

The team has scaled production, launching sites in Peru and Argentina. They have also entered an agreement with Chile’s National Commercial Fishing Industry Association, and are on track to recycle 100% of the country’s wild-caught net waste.

All Patagonia’s hat brims now use Netplus, accounting for 60 tonnes of recycled material. Matt Dwyer, who leads Patagonia’s materials innovation and development team, says the hats are just the beginning.

“We have to provide whatever economic incentive we can for these materials to get recycled into high-quality durable goods, like a jacket you’re going to wear for 25 or 30 years,” he explains. “It’s about proving it can be done.”