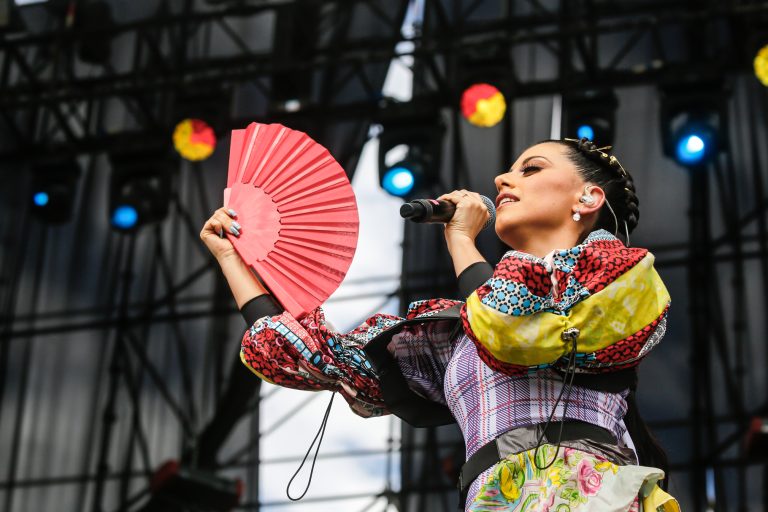 At Lollapalooza, Chile’s Live Music Scene Wakes Up After A Long Sleep

Lollapalooza’s 10th edition took place last weekend in the Chilean capital Santiago, two years after it was originally scheduled. The largest festival in the country, it marked an important comeback for live music after the local scene was crippled during the COVID-19 pandemic.

For young Chilean artists like Francisco Victoria, playing the festival marked an important step in his career. “It feels like turning into a butterfly after two years of almost nothing. Being here in front of people is so different from being in a studio. I didn’t know so many people were into my music until now,” he told us after his Friday set.

Victoria released his indie-pop debut, Prenda, in 2018, when he was 18. He released his second album, Herida, earlier this year and is now eager to tour with it. “I just want to be on stage, from now on until forever,” he said.

Urban artist and multi-instrumentalist Mariel Mariel took her urban flow to the main stage on Sunday afternoon. She performed songs from her upcoming album, La Batalla, including the latest single “De Los Limites”, a stark, confrontation song featuring Lido Pimienta, where powerful vocals are underscored by a throbbing electro bass.

“I felt the energy and the honour of stepping onto a big stage as an artist from Chile,” said Mariel Mariel. “I’ve been making music for so long—I’ve always believed I deserved a big stage and now I got it. It felt powerful.”

A festival founder herself, Mariel Mariel is active in Chile’s live music scene both playing and organizing shows. During the pandemic, she hosted digital music events and spent time working on her songs, but she was soon anxious to return to the stage.

“I began to feel angry. The metro was full, the football was packed, the malls were busy, everything was allowed except the music. It felt cruel.”

Aside from her own performance, she joined other Chilean musicians during their respective Lollapalooza sets for special collaborations. She highlights how being together at festivals facilitates creativity: I’m urban, you’re folk, let’s see what happens if we get on stage together,” she said.  “Chile has a great music scene and we inspire each other.”

Chile’s trap artists continue their meteoric rise. Ceaese and Pablo Chill-E spitted bars over full band backing arrangements, giving an intense edge to their explosive performances. Cease invited Chile’s RnB urban singer Souflia to perform their song “Yoshi”.  During his set, he rallied the crowd to cheer for the Chilean artists present at the festival, which was met with thunderous applause.

One of the only national acts to headline a stage, Javiera Mena’s triumphant Saturday set packed in hits from her 15-year-spanning career, opening with 2022 pop-electro song “Culpa” followed by 2014 throwback “La Joya”. It wasn’t a problem that her slot clashed with international headliner and fellow pop crooner Miley Cyrus—Javiera’s loyal local fanbase packed around, singing each song word-for-word.