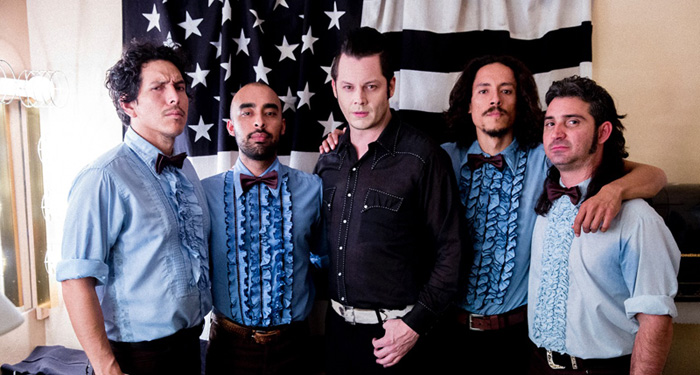 Driving from LA to Columbus Ohio and back, in two weeks, is not an easy task (especially when sharing three cubic feet of air space with four adult males!) However, when you have the opportunity to satisfy your high school rock ‘n’ roll dreams, i.e. open for Jack White in seven sold out arenas throughout the country; no body odor, no AZ highway patrol officer, no spread of black ice could deter us from coming correct on this once in a lifetime opportunity.

Before I describe my experience on this tour, I gotta say that Isaiah Ikey Owens was the man who made it happen. May he rest in power! Our friend Ikey, best known for his work tearing up the keys with the Mars Volta, was an integral part of Mr. White’s band, always bringing magically passionate vibes until his untimely passing last November. His death hit us all hard! Ikey was scheduled to fly in from Nashville to produce our next EP. His energy was always present on every stage and part of our prayers before every show. We were also blessed with stories told by Jack White’s staff describing the Chicano Batman tee he wore and the Chicano Batstickers he would tag the tour bus with.

It was an honor for us to embark on a journey that Ikey, in fact, suggested to the Jack White camp for their tour in Mexico. Instead (due to unforeseen forces in the universe), Chicano Batman became the supporting act for the American leg of Jack White’s Lazaretto Tour this last February (2015).

“Dad didn’t get why the openers for Jack White was a Hispanic band. I just said ‘Dad you didn’t hear them play’. Rock on @chicanobatman.”

This tweet accurately frames the paradigmatic social experiment that we as a band were a part of. Chicano Batman was the opener for Jack White in six American cities (Austin, Starkville Mississippi, Columbus Ohio, Norman Oklahoma, Albuquerque, and Las Vegas) in concerts that were (for the most part) attended by white people. I don’t think I can describe the phenomenon any clearer than that. If analyzed under an academic lens, this subject could be dissected by critical race theorists the world abroad. With plenty of articles and reviews of the tour, they would have a field day! From tweets, to blogs, to College Newspapers, and weekly periodicals; Jack White was the main musical subject of the moment, and his sidekick Chicano Batman was always mentioned. To put it simply, Chicano Batman became the WTF of the split second. Some liked and others didn’t. But it must be said, controversy was in the air with baffled stares, and all would agree, that Chicano Batman definitely shook up the scene in more ways than one.

The tweet mentioned earlier was a result of our first show in Austin. Before stepping on that stage (I can feel my stomach turn as I write) my heart was a commercial dryer tossing around my nerves. We were about to perform a music hall packed with 4,000+ Jack White fans. I couldn’t help to ponder and regurgitate nightmarish thoughts of flying beer bottles and rotten apple cores grazing me as I crooned in Spanish, it’s what I imagined Ritchie Valens going through in the 1950s. I felt like I do when I walk into a random truck stop or diner anywhere the Global South has not made its indelible mark. I felt like a substitute teacher about to enter a class full of mean kids ready to chew me out and humiliate me for the fun of it. Surprisingly though, after summoning the Holy Spirit in brotherly communion, my Chicano Batbrothers and I were received by an enthusiastic crowd whose cheering filled the Austin Music Hall.

I imagine that such a glorious reaction stemmed from the immense anticipation brewing in the core of the crowd from people camped in line for Jack.

But what about the opener? All suspicions and rumors were illuminated as we walked on stage “dressed to the nines in tuxedo shirts [and] laughable haircuts” (Curtis, Austin Chronicle). So there we were chugging away, four different shades of brown faces playing our hearts out in a span of 45 minutes in the heart of Texas. I’m not gonna lie and say that our set was effortless and magically flowing. For me performing is always hard work as I balance between singing, playing the keys and guitar. But at the same time, it is always a soulful experience with a plethora of lessons in human connection and expression. It is in this light that I describe the vibe from my position on the stage.

Unlike smaller stages and venues in LA or the Bay area, where many fans sing verbatim every lyric, many people simply stood there watching headlong in analysis, not totally disconnected, but simply watching. I would eagerly survey the crowd for anything, someone inspired by what we were doing, in order to launch myself into a euphoric state of mind. Folks were there, but it was difficult to gauge the stadium, and I could feel the monumental pressure of the place and the moment. Cheers were consistent throughout our set, but as one person tweeted “its not easy opening for Jack White”, and she is absolutely cor-rect.

If this article were to be placed in some Rolodex in some library it could well be categorized under “Testimonials of opening acts”. Like any opener with the intent of winning over any crowd, the odds were against us. Added to odds however, is the fact that half of our set was in Spanish. As one blogger wrote, “their musical talent was decent, but the fact that the majority of their songs are Spanish really turned me off. Not that I don’t appreciate any foreign music, but it just wasn’t enjoyable for me. It was all very questionable, but I guess it makes sense that Jack White, being the character he is, would choose them to open.” (Shafer, musicblogged)

Jack White, we definitely appreciate you having us as your opener! And if such a decision was influenced by your desire to change America’s musical landscape, we love you all the more! Regardless of Jack’s intention, Chicano Batman WAS changing the musical landscape in America as we opened up for the top rock act in the country. Responses to an article in the Austin Chronicle written up after our second show in Austin, who described us as “god awful,” substantiate this. This is exemplified by Patty who stated, “Laughable haircuts? That’s such a cheap shot. This is the sound of America that’s coming, Kevin. Whether you get it or not. Get ready!”

In fact, crowds across America showed us plenty of love! Whether it be a tweet comparing us to The Doors and Jimi Hendrix or a warm embrace (which was the ultimate compliment, no lie!), there were people all over the country from Mississippi to Las Vegas, who felt our music and became fans. When we walked onto the stage in Starkville, Mississippi, it felt like “a huge living room.” (Eduardo Arenas, bass) The audience, tightly concentrated in the pit in front of us, was enthusiastic and embracing. I caught many a smile, and I could feel the movement in people’s bodies. We felt southern hospitality and human warmth in Mississippi, contrary to stereotypes and my fears of a xenophobic mob. In fact, many of my preconceived notions of the American South and Midwest were thwarted by the good vibes I felt from people on and off the stage. The crowd at Columbus Ohio made us feel great! One tweet read “Stellar performance in Columbus, expectations were unknown but my mind indeed blown. Far fucking out my friends.”

“Take the good with the bad”, is a saying that rang very true on this tour. While many tweets expressed approval, others like “What is this hot garbage!” and “#Chicano Batman odd choice for your fan demographic”, expressed disapproval. Online Reviews however, were probably the most disheartening for us Chicano Batcrusaders (driving endlessly through America, packed like sardines in a can). Some critics like the ones quoted earlier, held no punches and poked fun at us in every which way, with random associations and categorizations that have little to do with our music. Take this review from the Mississippi show as a case in point:

“The first band was called Chicano Batman from Los Angeles. They were just as weird as the name sounds. All four members came out dressed in powder blue ruffled shirts. The singer looked like a mixture of Weird Al and Jesus. At some point, the singer started playing Spanish salsa songs and he was not easily understood because he was singing in Spanish as well. It was different.” (Haynes, The Capstone)

As you can see, all this writer has to say about us is that we are weird and that we are different. To be honest, I love that! I love music that is weird and different because I can’t stand music that is generic and easily digestible. I must also say that we love salsa! But to describe us as a salsa band, that’s pretty off target. More than an overview of our musical performance, this passage clearly elucidates the author’s ignorance. The review has almost nothing to do with our music, and the purpose of describing us is to create this drastic contrast, defining us as the other, as he/she praised Jack White (praise that he definitely deserves!). But essentially I feel that some folks weren’t open enough to actually listen to us because of their anticipation for Jack White, and their musical narrow-mindedness.

Walking through the crowd after our set was also telling. As often as I could, I would take a stroll through the arena or stand by our merch table. The reception was scant compared to the parade that surrounds us after a typical show in California. Sometimes I would see a group of folks point me out from a distance and other times neutral stares and glances ensued. When folks were at arms distance, many graciously congratulated me or carried on a brief conversation. An older woman in her 50s, kept on repeating, “it’s all about the music!” as she pointed at her shirt which had the same refrain printed on it. When she expressed this I thought to myself, wow! She feels us for who we are, not by our status or any categorization people toss us into. On top of that she was somehow inherently expressing this explicitly through her body language. On the same token, others would say, “good show amigo!” or a random passerby would shout “arriba, arriba!”

Discover the world of Chicano Batman at chicanobatman.com