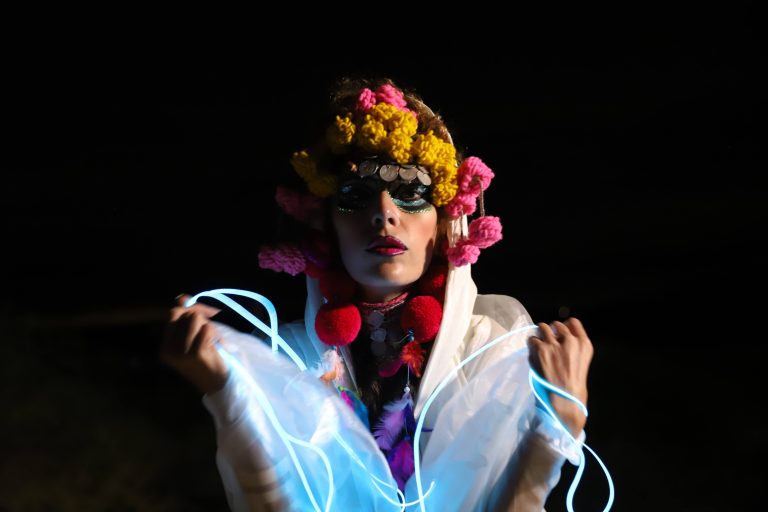 We are so happy to introduce you to TIMPANA, the latest signing to our record label. It’s fair to say that we were blown away when we were first introduced to this album. It seemed to tie together so many threads: the glorious indigenous vocal melodies of Luzmila Carpio, Nicola Cruz’s experiments with organic and electronic rhythms, and the Afro-Latin dance music that has become a fixture on underground club scenes the length and breadth of Latin America (and further afield). But there was something else going on too, something uniquely TIMPANA that kept pulling us back in.

Gwandena is the second album by TIMPANA, and the first where the group revolves around Alejandra Lanza (the project started as a duo, releasing a debut album, Alma Perdida, in 2010). For this album she brought in fellow Bolivian Chuntu (known as the co-founder of the Nuson music festival, and a member of Chicas Delfín) as the album’s producer. Together with ronroco/charango player Luciel Izumi, indigenous flute maestro Cucó and percussionists Miguel Crespo and Amado Espinoza, they have created an album that passes from the serene soundscapes of opening track “Jovi”, a folktronica anthem in the making, and final song “Espejo” with its weightless rhythm, to the heady thrust of the title track and “Pájaro”, bringing together Andean, Amazonian and African rhythms, both hitting like a hammer and unrelenting once they have you in their clutch.

The album is brought together by its narrative, as it tells the story of a young girl, Talina, on a journey of self-knowledge (auto-conocimiento). Accompanied by a colibri (hummingbird) she is taken into a world where nothing is what it seems, as illustrated by the title track, where she realises that herself and her grandmother are both one and the same.

Not willing to simply push Bolivian music into the 21st Century, Gwandena is an album that pulses with spiritual energy, trying to illicit the listener into questioning their own consciousness, and our relationship with the world around us. At least, that’s what it did to us.

We sincerely hope you enjoy this release. For now, you can listen to the first single below or via the usual streaming platforms, with the album set to drop on September 30th.

We also have a very special extra treat with this playlist of music from Bolivia’s underground and DIY scenes, curated by TIMPANA and the PrimaveraAnónima collective, with artists hailing from La Paz, Cochabamba, and elsewhere, and all of them creating a new conception of Bolivian music.