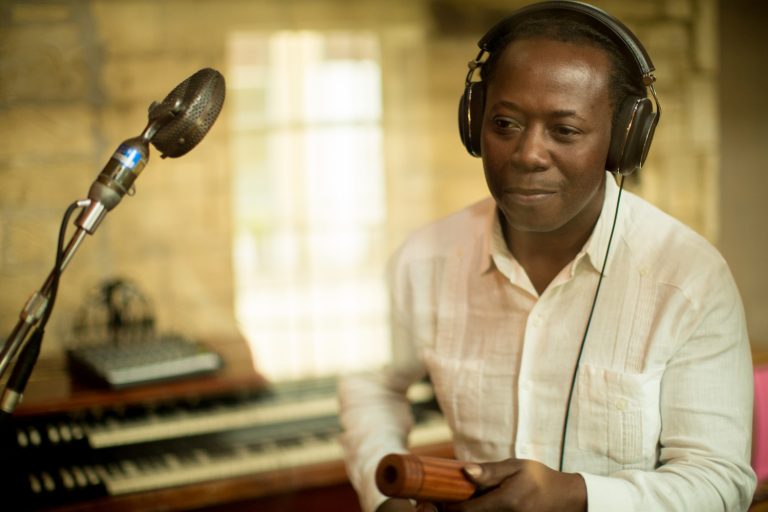 Darandi is the fourth solo album by Aurelio Martínez. It also marks the close of a thirty year cycle in the career of the Garifuna music legend from Honduras. In that time, he has brought traditional Garifuna music, specifically the paranda, to the attention of audiences around the world—always with the goal of preserving and promoting the culture and unique history of the marginalized yet resilient Garifuna people living primarily along Central America’s Caribbean coast.

But in the last few years, he tells me during a phone interview, it began to feel as if he were doing the same thing, over and over. In musical terms, he was alluding to traditional Garifuna hand percussion. Over the course of his career, Aurelio has attempted to push the boundaries of traditional Garifuna music, yet the presence of the two main Garifuna drums, maracas, and a clave has kept him from straying too far. Even so, there were other factors to consider, including Aurelio’s success abroad. “We’ve taken Garifuna music to where I never would have imagined taking it,” he explains, before listing several countries he has visited with his band; later adding, “When we were starting out, people thought we were crazy.” However, Aurelio wasn’t alone. And for that reason, he wanted to properly end one chapter of his career before beginning another.

Enter Darandi, which is also the Garifuna word for 30. The album, released earlier this year, includes 12 tracks, many of which can be found on Aurelio’s previous three releases. They are among his favourite songs to perform, yet more importantly, they bring together the music of several influential Garifuna musicians. For Aurelio, this was one of the primary reasons for recording Darandi. As he explains, “I wanted to close this cycle with songs that connect to artists, fellow musicians with whom we have shared the last 30 years…like Paul Nabor, Junie Aranda, Andy Palacio…”

So along with several traditional Garifuna standards, Darandi is an anthology of sorts—which in turn, allows Aurelio to satisfy another of his long term goals: to promote Garifuna music and culture to a younger generation often drawn away from their heritage and toward more mainstream culture. “I don’t want to leave behind just the songs,” he says. He wants to also leave behind a legacy for the next generation to carry on and modernize this tradition, while he works to build an international platform for emerging Garifuna artists.

Another reason for recording Darandi, Aurelio tells me, was the opportunity to finally capture the energy of his live performances. Unlike his prior studio albums, Darandi is an album of live recordings. It was recorded in 2015 at Real World Studios in the UK while Aurelio was in town with his band for a show. At that point in time, the band had spent the previous two years on tour, and in effect, preparing the songs that appear on the album. The results are thrilling; bursting with the energy of its live setting, Darandi is evidence that Aurelio is indeed ready to take on the next stage of his career.

When asked, he characterized this next stage as likely more spontaneous and also spoke of Garifuna music as compatible with this new approach: “I like the freedom of the music […] and I think that it’s going to help.” He tells me he wants to incorporate the drum kit alongside traditional Garifuna percussion instruments, then mentions adding brass or exploring jazz. Overall, he explains that his interest lies in playing with, “different kinds of artists, different kinds of rhythms, sounds… to find other mechanisms that can take Garifuna music to another level.” Yet while open to the possibilities, he has no intentions of rushing the process.

Darandi is released by Real World Records. You can find out more about the album and Aurelio at aureliomusic.net