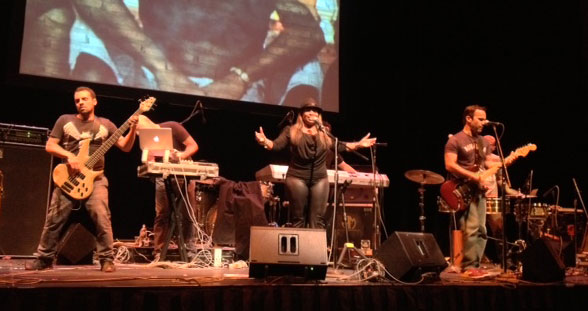 Yerba Buena Center for the Arts played host to a unique blend of global roots and modern dance music on the weekend of December 6 & 7, 2013.  The New Frequencies Fest, held annually in downtown San Francisco, set out on a 2-night exposé of musicians from around the globe to perform and tackle the social and political questions raised by their respective musical backgrounds.

Friday night, “North of the Border,” featured Bay Area artists The Genie and Dohee Lee, as well as the wild, wild west sound of Martha Redbone Roots Project and the Chicano sonideros La Santa Cecilia.  Saturday, or “South of the Border,” imported the sounds of the Afro-Peruvian Novalima and the DJ/Producer Camilo Lara aka Mexican Institute of Sound (MIS) while Cuban mixmaster  DJ Leydis splashed in some sweet riddims.

The entirety of the event was well worth the price of admission and all the artists were fantastic in offering a perspective on how their music relates to each other. But, as a disclaimer, the Sounds and Colours perspective is the view from the South; therefore this piece will be focused on the event Saturday.

The day began early at 4 pm with a panel disussion entitled, “Èl Que no Tiene Dinga, Tiene Mandinga.” This title is an old Peruvian saying originally coined by writer Ricardo Palma, meaning everyone has either indigenous blood or African. Understood to illustrate the Peruvian blend of heritage, this saying can be taken much farther in 2013 beyond the borders of Perú to classify a large majority up and down the American continents. Though minimally attended, it provided an introduction into where the music, which would be heard only hours later, comes from.

After a recess the guests started to settle in for the main course. A four-person panel, composed of Milagros Guerrero and Grimaldo del Solar of Novalima, Camilo Lara, and DJ Leydis, sat in front of a well-constructed stage, complete with an intrusively large visual screen. The talk was facilitated and translated by Maria Catalina Johnson and bounced back and forth between English and Spanish, humour and serious undertones.

After an introduction and about one question each it was time to begin the show. DJ Leydis immediately took to the turntables blending a reverent mix of reggae, hip-hop, cumbias and African music. The crowd mingled around a fairly small space, in square meters not in sense of importance, though the chairs waited in the middle of the dance floor where they unfortunately stayed for the remainder of the evening.

But that didn’t keep a slightly older, whiter, professorial crowd from getting down to the drum and beats of Novalima (pictured performing at the top of this page). The cajón, the cajita, and the quijada provided a look into the past of Afro-Peruvian instruments during the show, while the electronic master blended, faded and enhanced the music to give it the most modern of sounds. The balance of the modern and traditional is perfectly achieved by Novalima, arriving at a sexy, sophisticated sound that people young and old can enjoy harmoniously. The lyrics of their music is full of old slave chants of unity and rebellion, expressing a darker period in history, but with a crowd who’s first language was not Spanish, let alone an African dialect, the rhythms and melodies took center stage and with dance Novalima put on a beautiful show.

Next up was Mexican Institute of Sound, an idea/mission carried out by Camilo Lara. Camilo had discussed earlier in the day how his music used to be all about mixing the international rock/pop scene with the street cumbias of Mexico City, while creating a party atmosphere. With MIS’s latest album Politico, the music has taken on more political and social messages, while still maintaining a festive fusion of modern day music.

The recorded albums from MIS provide a great soundtrack to a rowdy house party, but when they are translated to a live performance, it feels something is missing. There is a drummer and a guitarist supplying mostly grunge, punk rock riffs and drum lines, and Camilo executing an array of foot peddles, drum machines and effects pads. Whereas the recorded version is polished and clean, the live version feels chaotic and gritty. There is a rock n’ roll aspect to the live show, but the music doesn’t really fit the attitude.

The set was held together by humour in between tracks, an influx of boozed up young fans and a distracting visual screen helping to augment a disjointed audio performance. Regardless of my personal opinion, people stayed and danced throughout the night, offering an extraordinary atmosphere for these international groups to showcase their unique sounds.