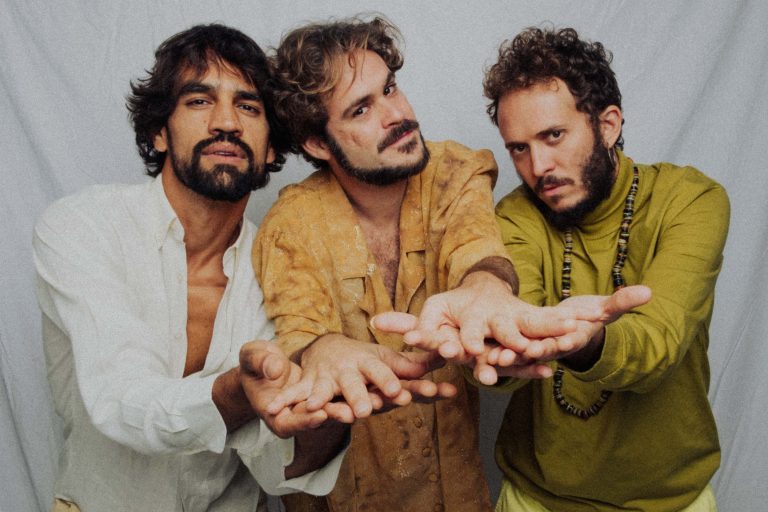 PREMIÈRE: Plurality and Preservation at the Heart of Brazilian Trio Behind ‘O Destino do Clã’

Plurality is key to O Destino do Clã, a new album by a trio of established Brazilian musicians and songwriters. It’s there in their backgrounds, Luiz Gabriel Lopes, Gustavito, and Nanan, coming separately from working in folk, MPB, carnival music, and beyond (Nanan is also known for his work on environmental causes, and for being a part of the collectives Playing for Change and Kosmik Band).

But as shown in their debut single, plurality is also a theme in their lyrics. “Que Cor Tem Lá” is an immersive experience tailored for transcendentalism.

The singers name-drop colours and religious references such as Krishna, São Miguel (Saint Michael) and Ogum over a peaceful arrangement of chords, forming a chain of symbols that sound mantra-like rather than randomly accumulated. They culminate in the lyrics: “Que cor tem lá? / Que cor sou eu? / Sou arco-íris” (“What colour is there? / What colour am I? / I’m a rainbow”); offering a synthesis of the message of the song, and why not?, of O Destino do Clã too.

Just like the other tracks from the trio’s first album (which will be released later in 2022), “Que Cor Tem Lá” was recorded during Lopes, Gustavito, and Nanan’s stay in a preservation area in Minas Gerais. It’s easy to hear how nature influenced the sound of the project, which also carries the musical imprint of African and Brazilian indigenous cultures.

O Destino do Clã by Luiz Gabriel Lopes, Gustavito and Nanan will be released later this year