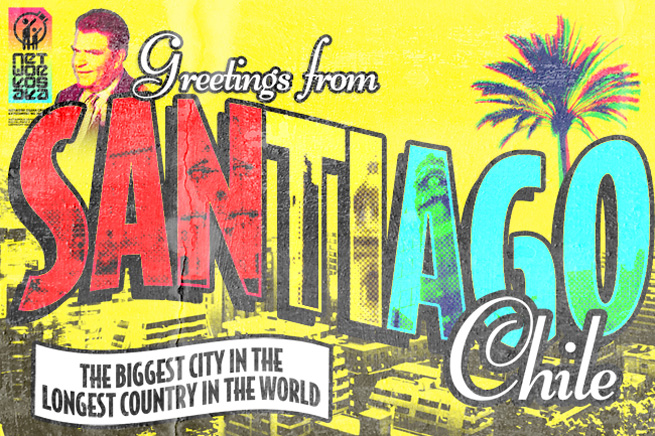 In many ways Santiago is a patchwork city. Each commune, or barrio, with its own architecture and atmosphere. The modern chic Providencia and Los Condes, air conditioned shops, boulevards and sky scrapers, filled with those benefiting from the new Chile. Bellavista, low buildings, murals, and bohemia. Or the centre full of 1950s and 60s high-rise, unruly cooling units protruding from window after window.

Chile is a rising force in South America, driven by growing demand for it’s most treasured primary resource; copper, and now reaping the benefits from decades of neoliberal economic policies it’s capital is growing up.

Santiago de Chile is becoming a financial powerhouse in the region, and with it modernisation, multinational headquarters, new transport systems, conflict over the new while certain traditions are fiercely maintained. While Santiago lacks the Easter celebrations common across the continent, trying to find an empanada without fish over the weekend will be impossible. Another common feature of Latin American cities, the favela, are also noticeable by their absence. Instead modern green spaces run along the Mapocho river on whose banks the city sits. As the affluence grows desire for green spaces has increased and the plans are there to deliver them.

The two cerros, San Cristobal and Santa Lucia, have long been part of the Santiago skyline. The first is now a national park, and the second is supposed to be where Spanish settlers first brought Santiago into being. Both are now popular with tourists and locals alike looking for an oasis in the city.

Don’t get me wrong, Santiago is by no means an environmentalist’s dream, heavy smog hangs over the city most of the year completely obscuring the mountains at its worst.

Unlike cities such as London where a couple of streets can separate millionaires from the rest of us, Santiago has great swaths of conformity until you reach a border, then it all changes, until the next border. As though each section has been picked up from another city and brought to Santiago to be intergraded.

One of the striking things about walking around Santiago is the modernity of the buildings, very few colonial buildings remain, and most of the city feels as though it has been built in the past century. This is in part due to the frequency of earthquakes that plague the city and the rest of the country. The Museo Belles Artes currently has to be entered through what used to be a side door while the grand entranceway remains crumbled and cracked after the February 27th earthquake in 2010. There is a prevailing feeling Santiago’s time is now. Reminders of the past can still be found on the names of streets, public buildings, etc., (Arm yourself with Wikipedia, and a brief walk round the city can provide you with an interesting back story of the place). But Chile’s past is like the embarrassing uncle. The elephant in the room. The 17 years of military dictatorship under General Augusto Pinochet. A new museum was opened in 2010, The Museum of Memory and Human Rights, detailing human rights abuses in Chile and globally. While not tucked away out of site, it is a little off the beaten track, which in many ways reflects the attitude to the period.

Emotions surrounding the 1973 coup, Allende, and the 3,000 people who went missing, still run high, and high praise and hatred can still be found for both Allende and Pincohet depending on who your with.

But a new generation is coming of age. One free from the mental shackles of dictatorship. One willing to go to the streets and campaign for the type of country they want to live in. An evening long kiss-o-thon was held earlier this year in support of educational reform (public shows of affection are nothing new in Santiago, the parks, pavements, bars, cinemas are all littered with them). Subsequent protests have got a bit more nasty with violence and arrests, but have continued.

In many ways Santiago is Chile. Forty percent of the population live in the capital and it produces 45 percent of the country’s GDP, as well as housing the presidential palace and government buildings. Yet in many other, arguably more important, ways it has a culture of its own. Outside the city the country is much more rural, even the second cities do not come close in size to Santiago giving the place a uniquely urban, international feel compared to the rest of the country.

This in some ways damages its reputation within Chile, with many Chileans feeling unrepresented and distant, both physically and culturally from their capital.

The primacy of the capital does bring in the arts from around the country with more force as a result. Small-scale museums dedicated to promoting mainly Chilean art spring up all the time. The streets are lined with murals, especially in Bellavista. Many of the powerhouses of Chilean art made the capital their home. Roberto Matta, a native of the city, will have a major review of his life’s work displayed permanently after an international tour.

But it is literature, and poetry in particular, where Santiago comes into its own. From Pablo Neruda to the poet physicist Nicanor Parra. President Sebastian Pinera recently described the country as “the land of poets”.

When Gonzalo Rojas died in April of 2011 two days of national mourning were declared and citizens young and old filed past his coffin, laying in state in the Museo Belles Artes, to pay their respects.

It is a city of contradictions, where the new and the old currently live side by side, but not for long.

In Santiago, Chile
The days are interminably long:
Several eternities in a day.

Like the vendors of seaweed
Traveling on the backs of mules:
You yawn – you yawn again.

Yet the weeks are short
The months go racing by
And the years have wings.

You can read further perspectives on Chile from Mark Briggs in a series of articles he wrote for Sounds and Colours called Santiago Days. Follow his Tweets at @briggsma.