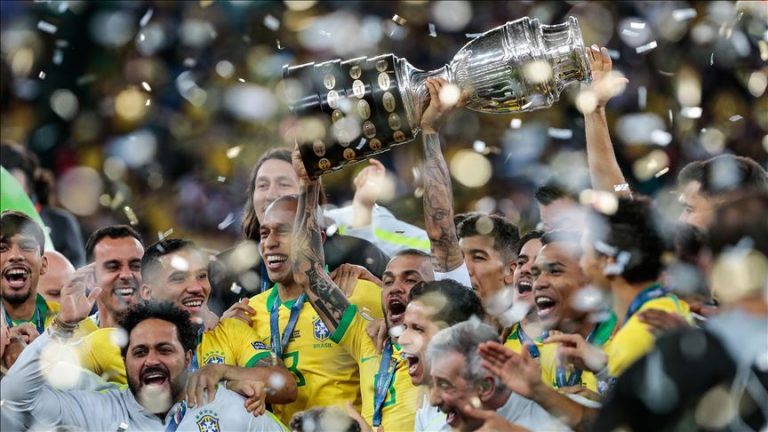 Looking at the 5 best players from The Copa America 2019

After Brazil hoisted the Copa America trophy on Sunday, that concluded this years Copa America, but as the dust has settled on the events there are numerous talking points, such as Messi and Argentina bowing out of an international tournament in a fashion that’s embarrassing for the would be GOAT, to Zizito the capybara mascot for the event who payed homage to Brazilian legend Zizinho.

But the topic we’re discussing today is what players performed best for their countries when looking at the results, unsurprisingly it’s filled with a lot of Brazil players, so without further ado, let’s begin the list.

Kicking off the list if Argentina Striker & Man City’s all-time leading scorer Sergio Agüero, who played in all of the 6 games Argentina played, starting in 5 of them. Througout the tournament he scored twice, once against Qutar and again in the 3rd place play off with the opening goal against Chile. Furthermore the Argentinian target man also helped a team mate score, netting himself an assist.

Chile’s Arturo Vidal’s efforts weren’t shown in the score line most nights, only netting one goal in a loss to Argentina in the 3rd place play off. But as a defensively minded player his prowess was clear to anyone watching him on the pitch. In the first 3 games he started his team only conceded a single goal and Vidal’s ability & composure lead the team on a good run to the semi finals.

On Brazil’s run to the final Firmino was nothing but impressive, making amazing plays that will be remembered for years, creating much of the Brazilian teams offense, add on to this the fact he scored 2 goals for the side and set team mates up 3 times, landing himself a tournament high 3 assists in the 6 games he played.

Again another Brazil player on the top 5 list, much like Vidal, he didn’t show up much on the scoresheet, only scoring a goal once in 6 games, but he was a key part in both the attack and defence for the Brazilian squad that only conceded once in the tournament, his efforts in the tournament secured him the golden ball award marking him as one of the most important players in the event.

In our mind the player that performed the best was the winner of the Golden Glove, Brazil’s goalkeeper Alisson, who won the Golden glove in the Premier League and Champions League as well as the Copa America. He was a key piece in Brazils success only conceding a single goal and racking up some mind blowing saves and being Brazil’s hero in penalty shootouts against Paraguay in the quarter finals.