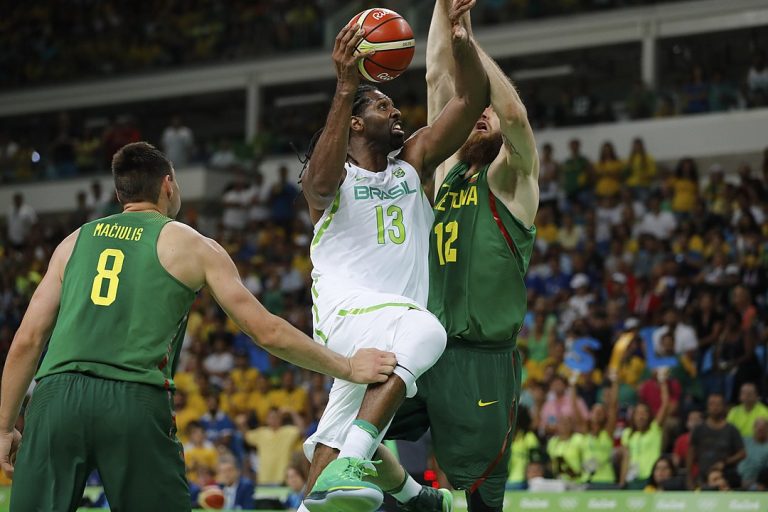 NBA players are not just from the United States, they are from all over the world, many of whom hail from countries in Central and South America as well as the Caribbean. Here is a list of some of the top players that are from countries in Latin America.

Born Maybyner Rodney Hilário and now legally known simply as Nenê is a 6’11’’ former NBA player who was born in 1982 in São Carlos, Brazil. He was given the honor of NBA All-Rookie First team in 2003 when he was drafted into the Denver Nuggets and is the first Brazilian to be drafted into the NBA. Nenê also played for the Washington Wizards for four years, then with the Houston Rockets until his retirement in 2020.

Patrick Aloysius Ewing was born in Kingston Jamaica in 1952 and predominantly played for the New York Knicks from 1985 to 2000. At 7’2’’ he was a hugely powerful center player and was known for his dominance and athleticism on the court. Ewing began playing in high school in Jamaica and quickly became one of the best high school basketball players in the country. He was named NBA Rookie of the Year in 1986 and is an eleven times NBA All-Star player. The NBA playoff betting odds were definitely in a team’s favor if Patrick Ewing was playing and out of respect and to honor his career, the New York Knicks retired his number 33 jersey.

One of the San Antonio Spurs’ “big three” (along with Tim Duncan and Tony Parker), shooting guard, Ginóbili played with the Spurs from 2002 to 2018, having previously played professionally in Argentina and Italy. After a slow couple of seasons with the Spurs, due mainly to injury, Ginóbili’s skill and familiarity with the game led to his increasing dominance on the court and eventually led to him being four times NBA Champion with the Spurs in 2003, 2005, 2014, and 2017. Even into his 40s he still was a top player in the NBA, having multiple 20-point games from the starting-bench while over the age of 40.

Currently with the Boston Celtics, Horford was drafted in 2007 by the Atlanta Hawks where he stayed until 2016. He was born in Puerto Plata, the third-largest city in the Dominican Republic. In his mid-teens, his family relocated to Michigan, where he attended high school and was an all-star basketball player there. He continued playing college in Florida for the Gators and was a two-time NCAA (2006 & 2007). He was then selected for the NBA draft. He eventually went on to become a five-time NBA All-Star, three champions with the Hawks and two with Boston.

Duncan, who was born in 1976 in St. Croix, originally wanted to be an Olympic swimmer in his youth. Unfortunately, Hurricane Hugo tore through the island, and amongst the devastation, was the ruins of the island’s only Olympic-sized swimming pool. This prompted him to turn to other sports and, being a tall individual, he opted for basketball. He was drafted by the San Antonio Spurs in 1997 where he won rookie of the year in 1998 and stayed with them until his retirement in 2016. He went on to become the assistant coach of the Spurs in 2019 until 2020.