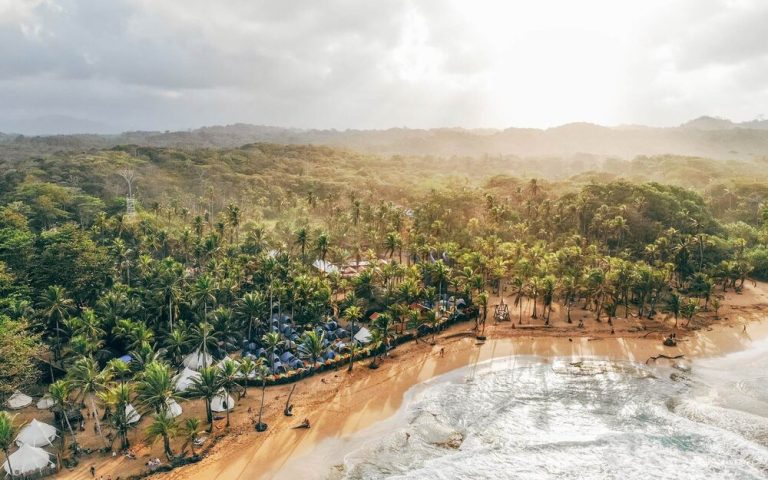 Beautiful blue-green oceans and luscious forests, Panama is home to the picturesque Mediterranean aesthetic that attracts holiday makers across the globe. It is also the home of the Tribal Gathering festival, an event that focuses on the indigenous people. Along with special guests and music, the festival has different shows and workshops that aim to teach attendees about indigenous life, teach wellness, and share native traditions to keep them alive. This year, however, the festivities were concluded by panic as international attendees are left stranded following a bout of miscommunication from the Panama government and little word from embassy authorities on when travel may become available to them.

Festivals are conducted in an array of locations – some big, some small – some inside, some outside – some rell renowned, others unheard of by many. In fact, some are sponsored by some of the largest outlets in the world, with Bloomberg recently reporting that there has been a surge in businesses who are using these events to spread their marketing message. Furthermore, Red Bull, Heineken and Verizon are other world-renowned brands who operate in such a way – using the opportunity to put their brand in front of the thousands of attendees, and millions around the world who watch the live streamed events.

The Tribal Gathering festival, which took place between 29th February and March 15th takes place on the country’s north coast, the electronic music and presentations from indigenous groups attract visitors from all walks of life, and this year current attendance from one attendee is thought to be over 300 people, including citizens from the UK, the US and parts of Europe including France and Germany, and with the festival taking place on a remote beach, connectivity for Wi-Fi and phone signal is extremely limited, if available at all, and an additional two-hour journey away from the nearest town.

The panic started amid rumours of a case of the COVID-19 coronavirus amongst the attendees on the last day of the festival after a number of the attendees had been feeling a little illness from a “belly bug” that had made its way around the camp, following which a test had been carried out that came back negative. After continued testing, the guests were preparing to leave and head back to Panama city until the festival site was put on lockdown by the Panama government, leaving the 300 guests stranded without any further information on how long the lockdown would continue for.

TO ALL ATTENDEES AND FOLLOWERS OF TRIBAL GATHERING: Update!!!!⭐️⭐️⭐️ The government and health officials have now decided to go back to the original mandate of allowing all nationals who have entered Panama over 14 days ago to exit the location. Those who have not must remain here in quarantine on site until they reach the 14 day period which could mean people actually staying here longer than the 23rd. In the wake of the President of Panama declaring a national emergency due to COVID-19/novel coronavirus, Panama’s Minister of Health has taken the extraordinary step of ordering all Tribal Gathering guests currently on site to remain in place until March 23. However, this was NOT in response to a positive COVID-19 test. There have been ZERO cases of COVID-19 confirmed on site, nor are any suspected at this time. Nevertheless, we are complying with all orders and recommendations of the Minister of Health, as the health and safety of our guests and crew remains our top priority. We also continue to work with the embassies of our guests from outside Panama to secure their assistance and support. Please contact the embassy of your family member’s home country for further information. @usembpan @who @bbcnews @vice @viceenespanol @un_ocha @who send help! @cnn @cnnee @nytimes @forbes @nationalpost @navara.media @cbsnews

A number of the guests did refuse to go back to the festival following the lockdown, and took the gamble with one of the bus drivers to return to Panama City – others were separated from friends whilst trying to leave on different shuttles from the festival, some of which were successful whilst others were turned back by police surrounding the festival. Following advice to contact the international embassies on information for leaving the country, Panama had since suspended all international flights for 30 days to prevent further spread. The UK embassy in Panama has since released an update saying that British nationals would be collected from the festival to return them to Panama City.

As there are currently no confirmed cases of the coronavirus on site, the 14-day lockdown imposed by the government is set to be lifted at the end of the week at which time the remainder of the guests and the staff working on site will be able to leave. Panama currently has 137 confirmed cases of COVID-19 and currently 1 death related to the virus, with this in mind when the lockdown is lifted a priority will be to keep those preparing to travel away from any risk of infection, and suspected they will also be placed on further quarantine once they return home.

It isn’t just in Panama that we are seeing forced closures of mass gatherings – Boris Johnson announced on 23rd March that the UK would be locked down, with music festivals such as Glastonbury and so forth being forced to cancel. Monte Carlo’s casino square has also been placed on lockdown – a location that is renowned for its millions of euros worth of riches. President Cyril Ramaphosa in South Africa has recently declared a national state of emergency, with Montecasino, Gold reef City and Superstar casinos all being closed for events and conferences – and alcohol sales being suspended in these venues. Furthermore, gaming promotions available in offline casinos have been banned to reduce the influx of people into these buildings. The President is advising people to stay at home, with more people likely to move from attending the likes of Montecasino, to taking their entertainment to the online equivalent of these venues. This shift is present also in the movie industry for example, with the James Bond premiere delayed until later this year, and Box Office revenues drop by over 73%. Along with the music industry (no concert tickets sold, and with shops closed, artists’ only stream of revenue is online merch), these are deinitely three examples of the worst hit industries as a dict result of this pandemic.

Many different countries are now beginning to suspend all travel, close their borders and impose restricted movement sanctions on their citizens, and with the fears growing across Latin America as the number of cases continue to rise, we expect further stories of stranded holiday go-ers to emerge over the coming weeks.