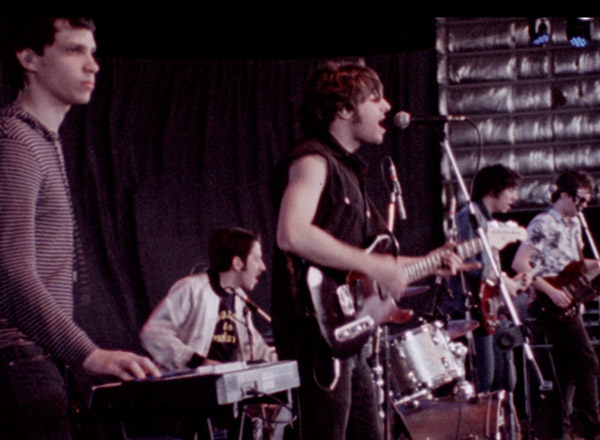 Written and directed by Santiago Charriere, this documentary focuses on Argentine pop-rock sensations Banda de Turistas as they tread the rocky ground between mainstream popularity and musical integrity. While traditional music documentaries tend to examine well-known bands’ rise to fame from obscurity, Bring Back Rock looks at what happens when a band has already achieved a reasonable level of popularity, and examines difficulties this new-found fame can bring.

Banda de Turistas formed in 2006 after the merging of two existing bands. Inspired by 60s psychedelic music and bands like the Beach Boys, The Zombies and Pink Floyd, Banda de Turistas soon caught the attention of Jarvis Cocker, who asked them to support Pulp on their 2008 tour of South America. After this initial break, the band found themselves playing alongside the likes of Depeche Mode, Kings of Leon, Green Day and Fatboy Slim at Spain’s biggest music festivals, helping to reinvigorate the Argentine rock scene.

It’s at this point in their career, with four successful albums behind them, and a legion of devoted fans across Latin America, that the director begins to follow the band with his cameras. He observes their rehearsals, concerts, life on the road, and how they deal with the pressures of writing the next elusive hit.

It’s a film in which we travel along with the band, watching how they juggle their stardom with staying true to themselves and to their musical vision. Charriere’s documentary is largely observational, with no interviews and no formal speaking to camera. However, it is obvious from the beginning that the director is more than just a fly on the wall; he is part of Banda de Turistas’ crew and part of their extended family. They often speak to him while he’s filming, seemingly forgetting that the camera is even there, allowing for a very personal and intimate look at the band and their internal conflicts.

Charriere has spoken about his preference for this style of documentary, citing Lightning in the Dark about Alberto Zamarbide, the first heavy metal singer in Argentina, as a particular favourite. This method allows the band to ‘lose control’ and creates a more natural atmosphoere, and consequently, greater empathy.

In this way, Charriere has managed to capture the special moments of tension and creativity that go hand in hand, allowing even those who are unfamiliar with the music of Banda de Turistas to enjoy the film. Bring Back Rock is as good an introduction as any to the upbeat pop-rock that made the band popular in the first place.

Bring Back Rock is screening at the Argentine Film Festival in London on Friday 27th and Saturday 28th November.