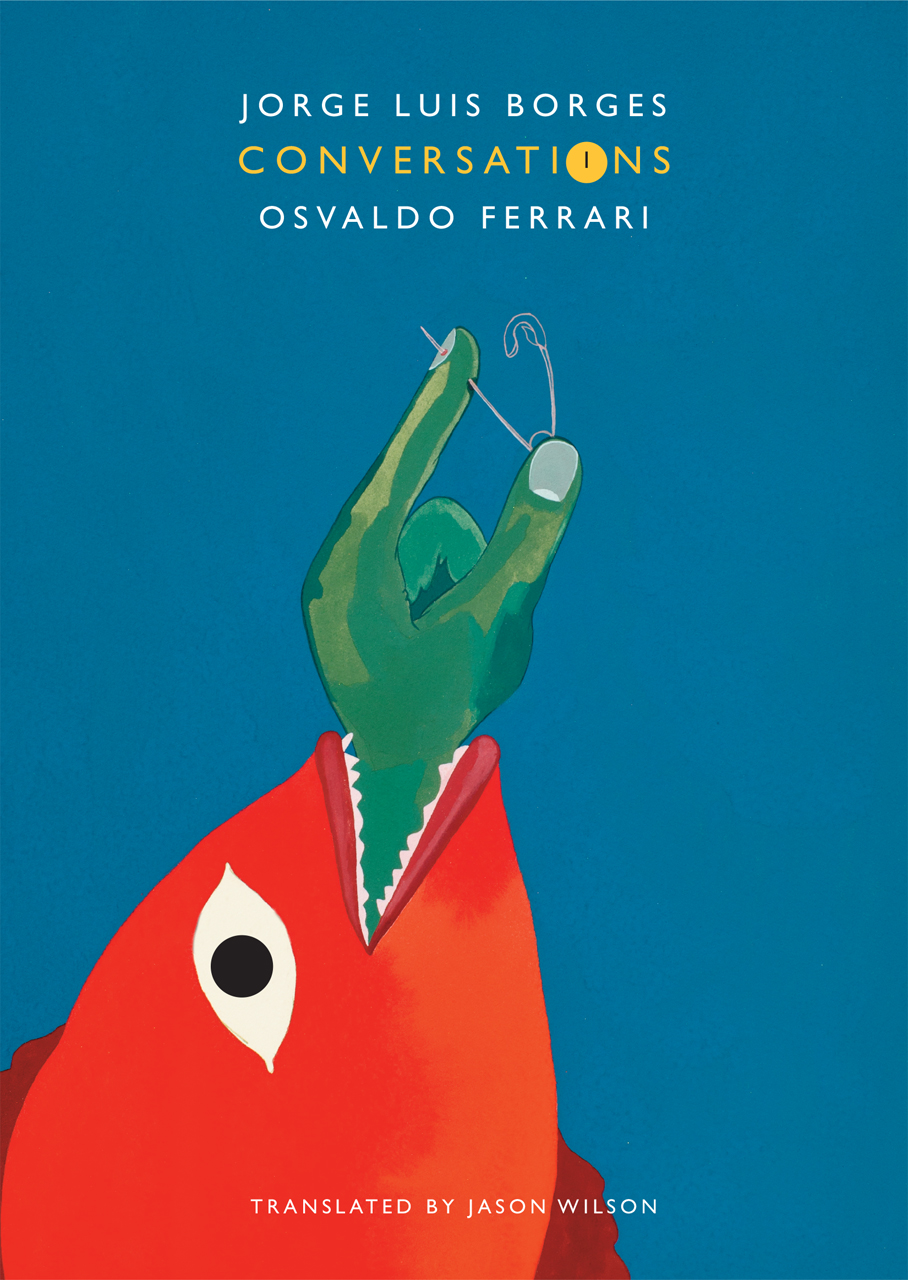 The conversations specified in the title of this book date from March 1984, when Jorge Luis Borges and Osvaldo Ferrari came together on Radio Municipal in Buenos Aires, to discuss subjects of mutual interest. Borges, the senior partner in the dialogue, was then considered the leading exponent of magic realism and the fantastic, two elements found throughout his poems, short stories and essays. Borges, as ever, had his own ideas about that.

There’s everything from Buddhism, I Ching, Confucianism, Kabbalah; Dante’s Divina Commedia; the Argentine identity and its literature (with specific recourse to Martín Fierro, the epic poem by José Hernández and Facundo: Civilization and Barbarism by Domingo Faustino Sarmiento about the federalist strongman, Juan Facundo Quiroga), two sides of the same coin; the Hollywood epic; agency in ethics; a catholic interest and knowledge of literature, ancient and modern (which involves James, Kafka, Melville, Whitman, Conrad, Wilde, Johnson, Shaw, Dickens, Almafuerte and others); the development of Modernism in the Americas via Rubén Dario and thereafter Leopoldo Lugones and Ricardo Jaimes Freyre; Borges’ libertarian loathing for state coercion of the individual by Left and Right; the dichotomy between the Aristotelian and Platonism, or reason versus myth, to humorous asides such as the notion that San Lorenzo de Almagro played “scientific” football whose, methodology, possible but implausible, was to lose.

Throughout the dialogues Borges expands on not just what he does and how he does it but on the general qualities that appeal to him in the works of specific authors. Certain themes are ever present: dreams, mirrors, memories, masks and labyrinths.

Borges was no lover of classifications or schools. For him, literature, specifically fiction, was by its nature both magic and fantastic and didn’t need subdivisions of the kind he partly blamed on the French (and the needs of literary criticism). His interest was always on the quality of the output rather than the prospectus. “In Mexico, for example,” Borges notes, “there was a literary movement frighteningly called Stridentism. It finally shut up, which was the best thing it could do.” By the same token, Borges rues the parallel phenomenon which consigns the work of Argentine literary figures like Enrique Banchs (La Urna), Arturo Capedevila (Audo Gelio), Silvina Ocampo (Oda Escolar and Enumeración de la Patria), Adolfo Bioy Casares and Juan Rodolfo Wilcock to obscurity because it doesn’t fit neatly into a genre or instigate a trend. Flaubert’s line, “When a line is good it loses its school” falls on deaf ears along with Borges’ contention, “when a poet gets it right, it’s right forever.”

He is unsparingly honest, too, when critiquing his own work or that of others. In one particular reference to a piece in the anthology, Everything and Nothing, he explores the labyrinthine world that traps us. When Ferrari reads an excerpt, Borges comments on how he made a mistake and how perhaps the whole story is an errata, or worse, a mistake.

Borges, throughout the dialogues, affirms his belief that good and bad will out regardless of the supposed method of delivery or its provenance. The only thing incontrovertible as far as he is concerned is that memory, that depository of everything, means that back is the only way forward. This has echoes of Kierkegaard. Borges himself always favoured the present – what he knew – but he would embellish it from whatever source, idea or time that came to mind.

The overriding emphasis of the broadcasts and Borges’ evident preoccupation is with the search for essence, which has at its core what it is to be and the nature of truth. He takes issue with Stevenson’s idea that a character is just “a string of words”, saying, “we need to be able to make them real or they tell us nothing.” Just like Alfred North Whitehead’s “fallacy of the perfect dictionary”, Borges advances his hypothesis that rationality becomes irrational if it is used as an explanation for everything. Similarly, he refutes Poe’s idea that writing is fundamentally an intellectual exercise dependent on reason. Borges prefers something more mystical such as the Greek muse, W B Yeats’ “the great memory” or Baudelaire’s contention that the inspiration for writing comes from the joy of the act itself.

The Value of Everything

Borges prefers the idea of dialogue to the oratorical. It’s about getting something from a discussion which advances knowledge and understanding and not the illusory kudos that comes from winning an argument. He sees no virtue in being right or wrong. Instead he likes the idea that truth could be found through dream, fable, myth and legend – from the poetic, the prosaic, the epic and the elegiac. He concludes: “I would say that fantasy literature is part of reality for reality must include everything. It’s absurd to suppose that this everything is revealed in the morning newspapers.” “Literary determinism” interjects Ferrari. To which Borges replies: “Homer wasn’t at the siege of Troy.”

Later in the discourse Borges says: “I tend to think through myth, through dreams or my own intuition.” However, as Ferrari notes, “We have opted for reason and method.” This sits ill with Borges’: “Yes, but we are ruled by mysticism and poetry.”

For Borges reading should be a pleasure. He thought compulsory reading and set texts to be a form of coercion which tended to degrade its purpose as something pleasurable. He was adamant that we should reject the objectification of everything and the trend toward utilitarian value.

Underpinning his thesis, which is strongly individualistic when it comes to creativity, Borges quotes the Scottish poet and children story writer, Andrew Lang who said: “we are all geniuses until we reach seven or eight years of age. That is, all children are geniuses. But then a child tries to be like others, he seeks mediocrity and nearly always achieves it.”

“I think that’s true,” he adds. He goes on to quote G K Chesterton, “for we have made fiction to suit ourselves, on the other hand reality is far stranger, because another has made it, the Other, God.” This sense of Other is pursued by Borges and he refutes philosopher John Locke’s claim that “we owe our knowledge to our senses.”

“We feel something else: hostility, indifference, love, friendship, adversity – things felt beyond the senses.”

The blurring of the real and the imagined comes to the fore in The Aleph, his work in which a point in time and space allows the whole universe to be viewed. Borges recounts that some readers berated him when they went in search of such and such a number on Corrientes, a Buenos Aires street featured in the story, and were disappointed to find it didn’t exist; an echo of Sherlock Holmes residence at 221B Baker Street or platform 9¾ at King’s Cross station in the Harry Potter stories. Yet now, in the latter cases, life has come to imitate art.

The paradox between fact and fiction is explored further in Funes the Memorious (from the anthology Ficciones), a short story regarding a character who remembers everything. Memory, one of Borges’ major themes, becomes an all-consuming monster – the gift that nullifies itself.

In some ways if you cannot forget, it is because you cannot remember, i.e. if everything is there it must be there in the singularity of time and space and is in essence an eternal now. You can only know what you know by a cumulative process dependent on generalisation and abstraction derived from what is or has been. If that knowledge, as in the case of Funes, is pre-ordained and all encompassing, it negates time, space, free will and memory.

The Blind Leading The Sighted

At the time of the discourse, Borges, a self-styled Argentine “European exile”, the result of alchemic cultural assimilation, had been blind for 30 years, but he remained active, alert and avowedly keen on travel, much of it spent receiving well-deserved honorary awards from prestigious seats of learning.

Any brief review of this work can only kick over the traces but Conversations does a wonderful job of revealing Borges’ knowledge, sagacity, imagination, concision, wit and humour.

Conversations: Volume 1 by Jorge Luis Borges and Osvaldo Ferrari (Translated by Jason Wilson), is available from Amazon UK and Amazon US