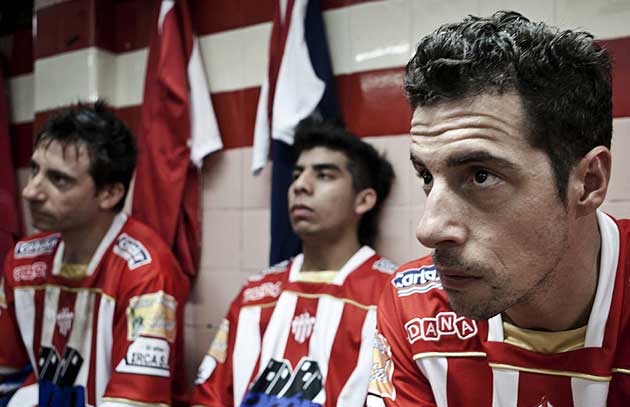 El 5 de Talleres takes us into the world of the football team of the title, Club Atlético Talleres (Remedios de Escalada), who play in Buenos Aires’ lower leagues, the Primera C Metropolitana to be precise.

The main character, “Patón” Bonassiolle (Esteban Lamothe), No.5, has five games left of his playing career as captain before the rigours of life outside encroach on him. The cosseted certainty and its routine are broken as the world of small triumphs and disasters recedes into the distance. Patón is ill prepared but it is a decision that comes to us all when one thing must end and something else must begin. Patón is foregoing the role of local hero and hot-headed defensive midfielder. He’s a man not averse to dishing it out on the field, off the field and in the radio studio.

Cinco Goes On A Hike

The film jogs along nicely through Patón’s dilemmas surrounding his future direction. Such is the case for many professional footballers playing in the lower leagues, where there isn’t the cushion of wealth or education to tie them over. In Patón’s case, his education was second rate and finished in the 5th grade. It is not that Club Atlético was especially safe, in fact, it’s just been rescued from bankruptcy and the players haven’t been paid in months. The quest for glory and love for the game do not put food on the table. In one particular exchange with the bosses, Patón says, “If I need to make a stew do I cut off my dick and put it in with vegetables?” The club is sometimes like a dysfunctional family but apart from his own family, this is the only world he really knows.

When Hugo Donato (Néstor Guzzini), the coach, exhorts his charges with a speech from “that Steven Seagal film about the submarine… the one with the big black guy who says, ‘Defeat at war isn’t the largest evil, except if it is inflicted upon us by an unworthy enemy,’” making anyone familiar with organised sports at any level feel straight away at home. The dressing room scenes, banter, gossip and swearing are all very well observed, and so too is the hyperbolic conflation of the heroic with the mundane. To put things into context, Donato, whom the board considers is the “right man” to turn things round, is on a losing streak compounded by his problems off the field. The hero of the hour now lives in his car since his wife, for some unspecified infraction, kicked him out of house.

A Life Less Sure

Patón, sympathetically and ably supported by his wife, Ale (Julieta Zylberberg), is trying to reinvent himself. We follow his often-maladroit attempts to re-enter the real world. He struggles with maths; doesn’t know the difference between retail and wholesale; can’t remember where he’s parked the car, and drinks and smokes. He even gives up the idea of learning to play the guitar because a kid in the shop plays bass so well it merely confirms his feelings of inadequacy. He is lucky, though, in other ways, he’s got a wife who loves him, a family that supports him and friends and colleagues who care about him.

Patón plays his last game in his usual combative way but the final moments of his career pass in dugout following his substitution.

This is a charming and amusing film, which manages its subject well. It is about getting by rather than getting on, the humble rather than the exulted, and it portrays the slings and arrows of outrageous fortune without cheesy sentimentality. How Patón is going to manage this transition isn’t concluded – it’s left open like life – yet the strength of his relationships with others bodes well.

El 5 de Talleres, directed by Adrián Biniez, is one of the offerings at this year’s Argentine Film Festival of London.