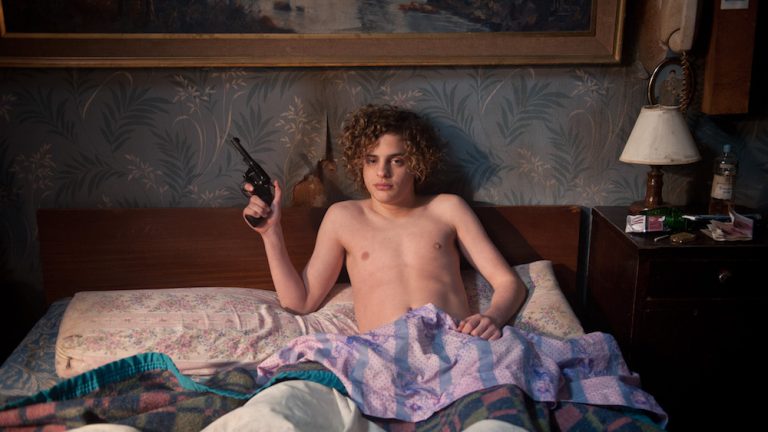 Thirty-odd years into a life sentence one would imagine that the mind begins to wander. And so, around this time, the attentions of Argentina’s longest serving inmate, Carlos Robledo Puch, turned to how his life story would be portrayed. Martin Scorsese, he had decided, would be ideal to capture his unique brew of bloodlust. Whilst a young Leonardo Dicaprio would be the perfect match for the Hollywood good looks that attracted such a media fervor upon Puch’s arrest, as the public struggled to square the heinousness of the crimes with the youthful, cherubic features of the accused.

Instead this dichotomy of beauty and brutality is put to celluloid by Luis Ortega. The Argentine director is an ideal fit given his work with El Marginal and Historia De Un Clan, two shows rich with idiosyncratic characters and a taste for violence.

In El Angel, Puch’s string of violent crimes across Greater Buenos Aires is captured through a kaleidoscope of cheery camera work and 1970s pop-cool in Tarantino-esque fashion. In fact, there are shades of Mia Wallace in Carlitos’ jutting waltz as he pours himself a whiskey and dances to music during a robbery at a wealthy house in the film’s opening scene. It isn’t long after that that Carlitos meets Ramon, and the two embark on a slew of heists and hold-ups, which, under the tutelage of Ramon’s father, Jose, who introduces Carlitos to firearms, soon escalates into a bloodier cocktail of delinquency.

The truth is that El Angel is a rather airbrushed portrait of Puch. The grimmer incidents of his spree – the kidnapping, rape and murder of two women and the shooting (albeit missing) at an infant – have all been eschewed. Even many of the remaining moments of violence feel a little sanitized, with Carlitos spooked into shooting or forced into firing in some kill-or-be-killed scenario. Though this makes for a more palatable experience for mainstream cinema audiences, the risk is that by softening Puch’s barbaric edges, the juxtaposition of how something so beautiful can be so despicable becomes dulled and diluted. Without this crux, the fictionalized Carlitos becomes little more than a good-looking, gun-toting teen. And whilst this trope has long been a successful cinematic staple, it is not one which offers much in the way of originality or substance in the context of El Angel.

The film pokes and prods at what makes Carlitos tick without offering much more than a superficial insight into his psychological machinations. An early scene, as Carlitos watches his salesman father struggle, brings to mind Henry Hill’s Goodfellas’ monologue about not wanting to be just another schmuck. While the cold indifference in which he shoots two men as they sleep is reminiscent of the matter-of-fact impassivity of Meursault in Albert Camus’ The Stranger, something further underlined by the repeated use of breezy pop number “El Extrano Con El Pelo Largo (The Stranger with Long Hair)” by La Joven Guardia. This isn’t to say all Carlitos’ transgressions are treated with such chilling apathy. In fact there are times when Carlitos seems to actively enjoy what he is doing. This is especially clear in the stop-and-smell-the-flowers pep talk he gives as he tries on earrings whilst Ramon rifles through drawers at a high-end jewelers.

The pair’s gunslinging odyssey flickers with a slow-brew homoerotic tension giving a Bonnie-and-Clyde-type flavour. These feelings seemingly intensify within Carlitos, and are at least entertained, if not entirely shared, by Ramon. Although the film offers little more beyond this allusion as to the relationship between the two young men, it is unsurprising, given the political and sociological landscape in pre-military dictatorship Argentina, that sexual deviancy was used to explain the gruesome nature of the crimes.

The quality of the cast goes a long way to elevating what could be a gallery of run-of-the-mill rogues to a genuinely engaging villainous carousel. Chino Darin plays Ramon with a dandified panache. Whilst much of the film’s dark humour comes from the offbeat patter from Daniel Fanego and Mercedes Moran as Ramon’s parents. Not only is first-time film actor Lorenzo Ferro more than a match for Carlitos physically, with his full lips and golden curls, but he shines as he tightropes between wild-eyed mania and dead-eyed detachment.

El Angel was released across Argentine cinemas in August with a wider distribution expected later this year following a well-received screening at Cannes. Though sleek and aesthetically arresting, the bloody Bildungsroman of El Angel feels like a disappointedly-scant take on a genuinely horrific case. More of a snapshot of an Instagram outlaw, when a character probe into the dark web sociopath would have not just been closer to the reality, but ultimately more interesting.