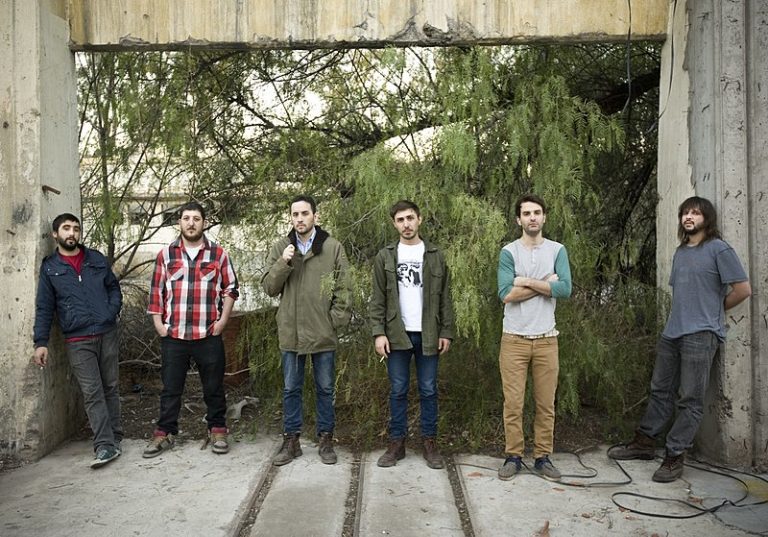 Everything Has The Chance of Reinventing Itself: An Interview with Mi Amigo Invencible

Mendoza’s indie godfathers Mi Amigo Invencible have released classic album after classic album that has placed them at the top of the Buenos Aires music scene. In 2015 the band released La Danza de los Principiantes, a breakthrough album [they formed and released their debut in 2007] that charmed the country’s musical epicenters, placing them as the go-to show for those resonating with the crash of Latin indie rock. Since then, they released two EPs in the search of a new sound for their next album. And though both Nuestra Noche and Ciencias Naturales were loved by their fans, there was still more in store.

Dutsiland, released earlier this year is their latest album. It is the sound of 10+ years of experience in the independent scene of Argentina. It’s an album that evokes confident experimentation and careless sway but still showcases the band’s numbing melancholic hints along with Mariano di Cesare’s poetic lyrics. Luke Temple and John McEntire worked hand in hand with the Mendocinos on the production, shaping the band’s initial sketches into the final release.

I spoke to the group’s Mariano di Cesare and Arturo Martín about the album, its recording, their various collaborations, artwork and the upcoming tour in Mexico and Colombia.

Mariano: We really don’t have much of an answer to that. When we got started, we wanted to keep it a secret. And we wanted to stick to that. Dutsiland is a word open to interpretation, it’s what the listeners take from it. Its meaning will come to whoever comes into that world. So, if there’s anywhere where it’s located it’s in those 33 minutes.

Have you read The Aleph? [Jorge Luis Borges’ novel] It’s a ball that keeps the world and universe’s secrets. And being it all ever-expanding and infinite, making it impossible for everything to fit into a ball, I think it’s ones imagination that unfolds and makes of the Aleph something substantial and interpretable. That’s sort of the inspiration and narrative we took forth when falling into Dutsiland.

About the art of the album…

M: Yeah, previous artwork was more comic-like and 2d-illustrations. We went for lively colours and sharp lines, we were pretty straight forward. But since we wanted to keep working with Fede (Federico Calandria) and we had already taken on an artistic shift in our sound and aesthetic we decided to follow up with that line of thought.

Our previous albums were pretty meticulous and carefully fostered with what we wanted to show and how we wanted to sound like. And Dutsiland is more an expression of our experience. It’s a natural recording of our sound, unforced and wholesome. So that makes those sharp lines we started with, vanish. And rather it unlocks an impressionist approach to both our sound and our visual.

What does “Fósil” [one of the tracks on the album] hide?

M: “Fósil” is actually one of the reasons for Dutsiland coming to be as a project. It’s one of our oldest songs and it was one of the hardest to record until we cracked it. It was the last song we recorded and we really weren’t feeling it. Until we started looking at if differently. That’s like a fifth version of the song…

I tried to translate the feeling I got when I found out I was going to be a father. And I was as straight forward as I could be, that’s the questioning in the lyrics “vas a ser un hombre, o un mujer o una señal.” And then after that idea, I let go of my angst of certainty. I let things be. And letting go inspired the rest of the album…

Your lyrics have a suggestiveness to them…

M: Yeah. We think that if we come off as too straight forward, we might be hastening the listener and what we want is for our audience to be free as much as we are when we write, so the experience of the music is up to their interpretation. And considering how things are today, this invisible incarceration we live in, we’re just looking for a freedom, emancipation.

Hiding the details and concepts like clues is a way to achieve that. We learned that from Leandro La Serna, our previous producer. We learned how to layer our art.

In “Batalla Gigante”, the lyrics read “Behind this great battle, there’s a common place.” Borges used to think this ‘common place’ was actually in ruins. Do you think it’s in ruins or ruined?

M: I don’t think it’s in ruins. Everything has the chance of reinventing itself, changing. When things are ruined, they become useless. I believe in change of heart, change of attitude. Everything is bound to change, for the good or the bad. What’s ruined is stuck.

The common place is precisely making us stronger. That’s where we’re all at, together. “Batalla Gigante” was actually “Pantalla Gigante” (large screen). I had written it as a reference to social media, and the odd fact of seeing people just like me off the mirror of a screen. But one day my son said “Play ‘Batalla Gigante’” and then I understood, that was a much better idea.

Is there any remnants from “Odio Tu Amo, Amo Tu Odio” [a single from 2014] in Dustiland?

M: Well, you did find something there. When looking for our new sound, we were looking for it in US music. Just like Dustiland. And for that single we ended up working with a person that had worked with The High Llamas, we worked with John McEntire there too.

Dutsiland‘s production has several star collaborators. What was it like to work with Luke Temple [an American singer/songwriter and producer]?

M: Luke Temple came to lead each of us, get us working and fast. It was quality work. He was very humble and hardworking. He came here to work, end of story. Before that, we weren’t really in touch, other than going through the logistics of his trip. But we rarely spoke about the music. Then he suggested to record on tape. And that’s when we looked for El Attic Studios, Patricio Claypole’s studio right out of the city. And he sort of took us to record live. We always wanted that.

Working with him was just putting the project in his hands. He tore up our song structure and reorganized it by fitting it into our initial essence. And that was pretty refreshing. We wouldn’t have been able to make the album without him.

M: He was the cherry on top.

Arturo: Working with him was a coincidence that turned into a wish. Luke had recommended a studio for us to mix and master the album. And when we checked out their web page, we saw that in their staff was John McEntire. And we all flipped out… We sent them an email and the studio answered us back. It was a bluff, John McEntire didn’t work there. But we ended up reaching out to him and he flew out to San Francisco to work with us.

Any thoughts on Dutsiland flying off to Mexico and Colombia…

M: Yeah, living a dream. We’ve been wanting to visit and get to know Latin America. more than Europe. Live together as a family, try delicious food and give it our all; make the audiences love our songs as much as we do.

A: Agreed, ever since we acquired the notion of where our music could reach out to our first goal was Mexico. For any artist in Argentina, I think. Because it’s a place where music and art are respected differently from here.

Mi Amigo Invencible are headed towards Ciudad de Mexico (15th November) , Bogotá (20th November), and Medellin (22nd November), inviting listeners and fans from the top of continent to join them in Dutsiland.