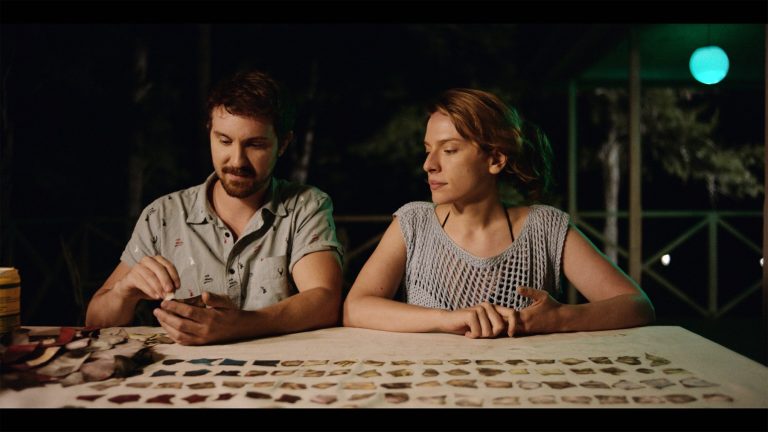 This enjoyable Argentine film is rooted in our preoccupation with where the virtual world stops and the real one begins. Written and directed by Nico Casavecchia, Finding Sofia, is warm, witty and engaging, with strong performances cut with amusing animation and narration. It’s a modern comedy of manners for the blogosphere.

How many self-proclaimed people with a ‘creative personality’ are there in America? The narrator asks. It’s eight million. This factoid is delivered by an amiable animated pine cone wearing a hat. Only 15% of them get a job ‘worthy’ of their talent. Just 2% will achieve ‘visibility’ and a mere 0.2% will achieve fame. Do you feel lucky? But then the pine cone delivers the coup de réalité: most of the 0.2% will have disappeared from view inside three years. The credo, though, remains doggedly persistent: “Trust yourself – you’re different.”

The hero, Alex (Sam Huntington), is a designer who’s created the YouTube sensation: Dancing Tomatoes. Alex and his design partner, Josh, have garnered the interest of an energy yoghurt manufacturer. The stage is set, but the discussion is brutally frank. The tomatoes have notched up 2m hits in three years. “How much money have you made?” asks the agent, who proceeds to answer his own question. “Zip! Zero! Nada! In the old days,” he says, “fame came with fortune. Now fame costs you money; you are paying for other people to enjoy.”

Contact with an Argentine girl called Sofia via the blog zone alters Alex’s focus. Somehow diversifying into dancing kiwi fruits and mangoes, etc., doesn’t seem quite so appealing after all. The word from Buenos Aires is succinct: “Your work is so shallow it is the perfect metaphor for a decadent world.” Alex isn’t deterred: “I was instantly attracted to her,” he says. This attraction becomes more ardent by the megabyte when she sends revealing pictures of herself and asks him to reciprocate. He duly obliges and the next thing, he’s hungover, $1,200 down and off to Buenos Aires.

Marred and Mired in La Plata

Alex duly arrives. He texts Sofia but is spurned: “It isn’t a convenient time,” she says. Alex, though, is not to be denied. He claims he’s been robbed and dumps off his passport and belongings (everything except the maquettes of the Dancing Tomatoes) in a store with left-luggage lockers and appeals to Sofia’s better nature.

A morose man called Victor (Rafael Spregelburd) arrives and drives Alex around Buenos Aires before eventually arriving at a jetty. On another jetty out in the boondocks of Tigre, Sofia (Andrea Caballo) awaits like an angelic avatar. Alex resorts to narration and animation to explain how a photon under the motive force of electromagnetism translates into the rules of attraction. In the meantime, Sofia hatches a plan to make Alex amenable to her boyfriend, Victor. Alex becomes the ‘cousin’ she’s never seen.

Alex is uncomfortable. Victor doesn’t like him. Sofia is somewhat agitated by his presence and Flor (Sofia Brihet), Victor’s assistant and Sofia’s long-time friend, is a harmless ingénue who takes it all at face value.

Victor, like Alex, is another artist with his eyes on the prize. It’s not an agent in his case, it’s a grant, but to stand a chance of getting it he must genuflect to the commercial altar. This self-proclaimed genius is waning. He’s become a penniless drunk who’s stuck in a grace-and-favour billet which belongs to his girlfriend’s family. Victor, like Alex, takes an executive decision and sets fire to all his work.

All is not lost though – the commercial sell-out Alex rediscovers his artistic mojo – and Victor’s work is reassembled phoenix-like to further metaphorise into his ‘seminal’ work on constructive deconstruction. It is a recurring theme.

A suitably sour-faced tomato introduces the next bit of narration. Alex tells us via Roland Barthes’ Camera Lucida (1980) that the personality splits in front of the camera: “1) The one I thought I was; 2) The one I wanted Sofia to think I was; 3) The one I feared Sofia saw in me.”

Tensions mount, when to celebrate, they breakout out the MDMA. Flor becomes enamoured with Victor, and Sofia and Alex attempt to finish what they’ve started. Later, once things have worn off, Flor tries to atone. That evening, much to his chagrin, Alex is surplus to requirements.

Thereafter, with Victor and Flor heading off on an artistic trip to “Damascus”, Sofia and Alex are set for their own particular denouement, one which contain surprises and implications for all concerned. There’s art for art’s sake, fuck for fuck’s sake, compromise for compromise’s sake, and last but not least, reality for reality’s sake. On the way, they all discover that reality and fiction are not as estranged as might first appear.

After another animated narrative interlude features George Bataille’s (1946) axiom: “That which cannot be absorbed must be spent: willingly, gloriously or catastrophically.” Alex, by now, is rediscovering something about himself and the world.  In a nicely ironic twist at the end there is one last gig for the Dancing Tomatoes.

Casavecchia’s intelligent screenplay and animation, complemented by Eloi Moli’s cinematography, and the sound and design contributions from Animal Music and Ana Cambre, make this a very watchable fable.