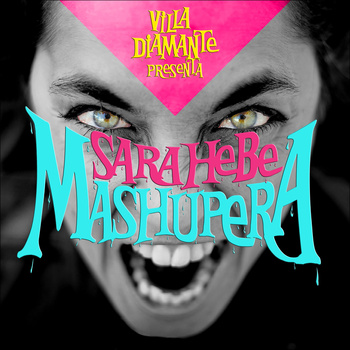 The excellent Villa Diamante presenta Sara Hebe – Mashupera EP from 2013 is once again available as a free download. Argentinean singer/rapper Sara Hebe got together last year with DJ/producer Villa Diamante to re-work some of her best-known tunes in one of Diamante’s trademark demented mash-ups. We’re big fans of Sara’s reggae hit ‘Otra Vez‘, which here undergoes the full digital cumbia treatment. Mean as hell. And is that the riff from Black Sabbath’s ‘Iron Man’ we can make out towards the end? The rest of the Mashupera EP darts through realms of bachata, hip hop and utter bastard electro.

Sara Hebe’s first album was 2009’s La Hija del Loco, which brought together several Buenos Aires producers and marked the singer out as a key name on the national hip hop scene. The former law student then released her second record, Puentera, in 2012. Fusing hip hop with a wide range of external styles, such as punk, cumbia and funk, she brings a political consciousness to her music, addressing topical issues both in her lyrics and in interviews.

In 2012, she told Argentina’s Página 12 newspaper that “my criticisms are not directed at a specific government, but to the whole of society, the whole of the system and its governors… I think that songwriting can serve as an antenna for what is happening, of what you see and write.” She also criticised modern consumerism, saying “it seems to me that you can’t speak out when you’ve got an enormous watch, wear Nike, use Ticketek and all these things.”

Villa Diamante, part of the ZZK label, focuses heavily on remixing traditional sounds with club-heavy bass and beats, throwing different ideas into a pot and basically seeing what comes out. It’s usually something pretty tasty.