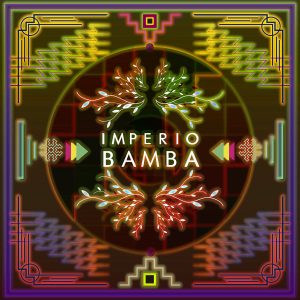 Imperio Bamba’s influences span their Latin American roots and beyond, with chicha, cumbia, salsa, psychedelia and Afro-Peruvian rhythms colouring their unpredictable sound. Their wholehearted advocacy of freedom of movement is not just a statement about migration, but about self-expression and dance too.

They’ll solidify your allegiance in the self-titled track “Imperio Bamba”, a message of resilience and celebration. Titi Damasso’s twangy guitar riffs rise beneath Javiera Limari’s soaring vocals, cut through by eruptive, addictive güiro rhythms. She sings: “In this upside-down world / where some feel they are above / those of us who’re put down / sneak into the cracks / taking over the ruins of their fake empire.”

The debut EP’s uplifting titular track, “My Favourite Things”, is a bilingual Afro-Peruvian reimagining of the classic tune with a chicha-infused samba twist. Opening track “Summer”, is a warm, sunny groover, inviting you to shake off your troubles and see the light inside yourself. “The sun is shining inside of you / don’t wait for summer to feel good,” they urge, traversing from Tame Impala-esque sliding acid guitar, to a rocky breakdown and into an elevated cumbia beat interspersed with a reaching guitar solo and liberating vocals imploring you to give in and “feel good”.

“Los Amantes”, a romantic, psychedelic poem-song inspired by the Julio Cortázar poem of the same name, sings of migrant lovers in the city finding each other through desire. The song is a musical journey, with spoken word narration, climbing electric guitar riffs and rhythms travelling from the trippy to the bailable. The video, filmed in some of London’s more colourful streets, features local performers throwing shapes in varied styles. The band perform, clad in multicoloured outfits and with trippy neon visual FX overlaid.

Also, check out Imperio Bamba’s video covers of their favourite things – songs which have inspired them – recorded from home in Chile, Peru and London.