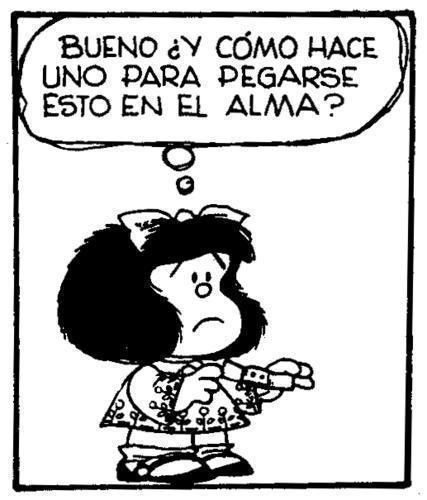 Joaquín Salvador Lavado Tejón, Quino, was born in 1932 in Mendoza, Argentina. Mafalda was born also in Argentina, but is now a citizen of the world, widely read from Argentina to Italy to Spain and beyond – as far as the language barriers allow her to travel.

Mafalda. Introducing Mafalda, thinking about how to put her into words that will do her, and her creator, justice isn’t easy. Yet immediately, just thinking about her puts a smile on my face. Mafalda is arguably one of the most recognisable and iconic cartoons, the Peanuts of the Spanish-speaking world. She’s a little girl, of about five years old when first introduced to the printed world, who has a wonderful head of black hair, full of ideas and worries. Mafalda loathes militarism, corruption and also soup (among many other things). She adores her friends and parents yet maintains a contemptuous disdain for her mother’s lack of profession and for her father’s lack of passion for real-life matters and an abundance of it for his houseplants. Mafalda and her friends also adore The Beatles and playing games such as the Government, where Mafalda, of course, plays the role of the president.

Mafalda, the comic strip, discusses and traverses issues of the world via means of Mafalda and her friends who debate themes including poverty, international relations, technological and industrial revolution, corruption, environmental destruction and more. At this point, reading Mafalda might sound like a dull endeavour, but it’s also full of frankness and a tenderness that comes from children discussing as adults would (or actually as adults wouldn’t most times), unflinchingly and with a plainness that is difficult to disregard. Quino’s cartoons and humour shine in their simplicity and timeless relatability. We’re shown the world as it’s seen through the eyes of a little girl who often condemns the older generation, her parents’ generation, for not doing enough and worries that they’re all fritos or ‘fried’, ruined if that’s what they’ll become when they grow up – cue her hatred for soup, which according to adults will help her grow up.

First published at a time when a coup d’état and increasing military violence threatened Argentina, the issues Mafalda spent many sleepless nights mulling over are not very different to the issues of the country and world in recent years. Mafalda’s favourite ‘toy’ is her globe, which she cares for just as much as Susanita cares for her doll who shouts ‘Mamá’ when pressing her belly. Susanita, like all of Mafalda’s friends, symbolises different attitudes. Susanita is governed by her desires to have children, Felipe is clever, a fan of technology and comic books, and dreams of becoming an engineer. Manolito, son of Spanish immigrants, is perhaps the most different to Mafalda – commercially-minded, slightly dumb and careless when it comes to real-life issues. To these, the original characters, Quino later adds Libertad (‘freedom’ in Spanish), Miguelito and Mafalda’s baby brother Guille. The richness in characters flows seamlessly into an astute and effective humour that makes it impossible for the reader to not fall madly in love with Mafalda and her friends.

Quino’s legacy leaves us with not only a curious, loving Mafalda, but also with a crowd of characters that fill our heart with a bittersweet joy. He’s also had a definite influence on Argentina’s Spanish, introducing phrases that are now part of everyday speech such as “otra vez sopa!” (not soup again!) to express frustration when a situation repeats itself. If you hear of someone being described as a Susanita, that’s someone whose aspirations stop at getting married and becoming a mother – although, thankfully, Susanita is falling into disuse.

I grew up in a very traditional Argentinian family. Love, cousins and facturas (pastries) were abundant. My grandparents, like those of many, were grandchildren of European immigrants and my name is only slightly more Italian than my best friend’s is Spanish. I was brought up with strong values, fairness and honesty front of mind. Yet, a normalised and unashamed undertone of unfairness was ever-present. Our language was peppered with words that today would be welcomed with a slap; my dad like other dads, went to work while my mum, like other mums, stayed at home cooking and caring for me; and girls grew up more concerned with finding a boyfriend than anything else. Quino showed a whole generation that this was the norm for many families in the country and beyond, that so many of us were destined to be Susanitas but that we didn’t have to. The fire in Mafalda’s belly grew stronger and stronger and shone a light of hope on so many.

Perhaps this is one of the many reasons social media was flooded with goodbye messages, retweets and shares of Quino’s comic strips when the news of his passing hit the world on the 30th September of this year. The 1970s for the rest of the world might seem like an era when things were getting better, when we could hope for a better world, but in Argentina – a country where abortion still isn’t legal, where girls are murdered and raped all too regularly and the ever-present corruption and capitalism spread as fast as wildfire in the Amazon – the 1970s political landscape and military violence stopped Quino’s creations: “If I had continued drawing [Mafalda], they would have shot me.” Luckily for us, Mafalda is eternal, and someone we will introduce and read to younger generations with half a tear in our eyes and big hopes that they will be as touched by her courage as our generation was.