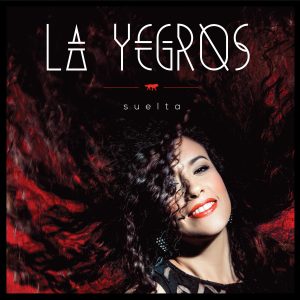 It might appear a little out of place that the woman dubbed “the queen of New Cumbia” and “the first lady of Electro Cumbia” should hail from Argentina. But (Mariana) La Yegros’ roots lie in the north east of the country, a rural tropical region bordering Paraguay and Brazil where, reputedly, folk play and dance to Colombian cumbia, as well as indigenous musical forms such as chamamé and carnavalito. Based now in Buenos Aires and France, La Yegros underlines here in her third album the myriad international influences that she has thus far assimilated and processed. In the same way that Sidestepper managed – so successfully – on 2016’s Supernatural Love, the singer melds diverse traditional and electronic elements with a basic cumbia template to create something new and refreshing. ‘New Cumbia’, if you will. Take “A Ver A Ver”, in which a pulsing electronic beat ushers in some discreet vibes, a ringing guitar refrain and then a whole stew of drums, accordion and some terrific upbeat vocals to create a suitably flamboyant opener.

She can do traditional with a straighter bat and a more conventional palette, too, as “Cuando” well illustrates. She even reprises the performance on the final track of the album, but this time with what sounds like a string quartet to accompany her. The production is similarly variegated throughout: “Cuando”‘s calmer Andean-infused vibe, for instance, is sandwiched between the more urgent and strident “Sube la Presion” and the dance-hall feel of “Alegria”, punctuated by a relentless synthesised call to the floor. The production comes courtesy of King Coya, a pioneer of the so-called Latin American ‘folktronica’ sound, and Eduardo Cabra of Puerto Rican Calle 13 group fame.

So there’s a whole lot of influences at work on Suelta – sometimes, in fact, a tad too many for its own good. When it works well – as on “Linda La Cumbia” or “Ruge”, where a bass synth wash is overlaid by handclaps, Andean flutes, accordion and another splendid vocal performance – it works very well. Otherwise – on, say, the slightly laboured “Nada Parece” or the somewhat shouty “Tenemos Voz” – then the worst you can say is that they don’t work quite so well. In this respect, you can draw parallels with another dynamic South American vocalist based in France: Flavia Coelho, who combines more Caribbean influences with those of her native Brazil.

The track “Tenemos Voz” translates as “we have a voice”. La Yegros is referring specifically to women the world over and she calls on them in her lyrics to demand the respect that they are owed. Not a little of that commodity is owed the artist herself for an album that exemplifies a distinct upward career trajectory. All in all, Suelta is an exuberant example of what you might describe as the internationalisation of traditional South American music. La Yegros is clearly a vital force and I look forward to her next release.

Suelta is available on Bandcamp