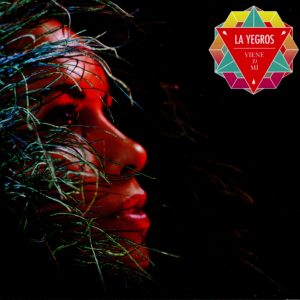 Mariana Yegros a.k.a. La Yegros, referred to as “The First Lady of Electronic Cumbia”, is an extremely attractive woman who possesses a very distinctive and original voice with the timbre of an elderly cantadora (a female South American folk singer), the piercing high tones of Amazonian indigenous chants and the coolness of a chic rapper. Her debut album Viene de Mi, a 10-track LP released worldwide on June 17th, has been much acclaimed by the international alternative music critique, and if you follow that buzz you might have come across the single with the same name as the album. I had. I’d listened to “Viene de Mi” and seen it’s video, and my first impression of La Yegros’ music was of vintage, acoustic accordion-driven cumbia; turns out I was wrong.

The album features a wide spectrum of influences and musical directions and although the formerly mentioned single does sound retro-oriented the rest of the album, as a very pleasant surprise, explores other territories. Instrumental track “Trocintro”, for instance, is also very organic but in a tropical punk kind of way. It’s dark, garage-like, atmospheric and… brilliant!

“El Bendito”, a chamame (folk song from the Argentine Northeast) in which La Yegros shifts from singing to rapping, rests in the borderline between tradition and electronica. “Iluminada”, featuring Spanish singer/poet El Gato Muñoz, walks along a similar path mixing old cumbia and beats, and “Que Me Hizo Mal”, the album’s closing track, displays similar characteristics with a Pop-flavoured chorus and lovely lively horns.

“Trocitos de Madera” is a killer track. It’s got a catchy chorus and an infectious groove. Previously included in a slightly different version on the compilation Beginner’s Guide to Cumbia (2010), this track could be La Yegros’ next single; in fact it should be. It could seriously kick ass in any dancefloor/party atmosphere. The lyrics talk about a nine-year-old Misionera girl (coming from Misiones, a province in the Northeastern corner of Argentina bordering with Paraguay and Brazil and home to La Yegros’ parents) who cries wooden bits and exorcises her sorrows by dancing non-stop. Surreal!

The rest of the album goes deeper into electronic in a more ZZK style (Buenos Aires based label and artist collective born out of Zizek Club nights who released this record and others by acts such as Frikstailers, Chancha Vía Circuito, El Remolon). Solo, with a deep ethnic beat, “Cariño”, featuring Middle Eastern vibes and low-pitched synths, “Vagar”, a funky mystic tune about living leisurely and “Ya No Llores Mas”, an Andean cumbia featuring Argentinian tropical diva/rapper Miss Bolivia, all portray La Yegros’ voice at it’s sexiest, most powerful and aboriginal.

Viene De Mi is available from Amazon and iTunes