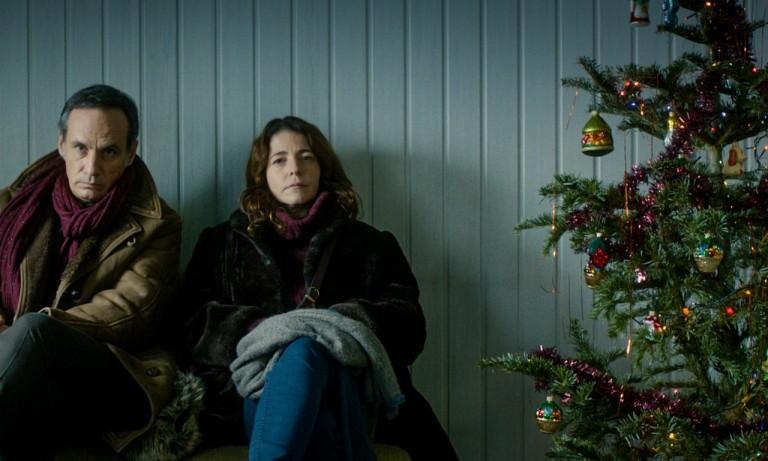 The shadow of a plane drifts silently across a stunning winter wilderness. An apt and rather prophetically named flight from Small Planet Airlines taxis toward the terminal. Directed by the Argentine director, Daniela Fejerman, L’Adopció is an adept and often poignant exploration of the emotionally fraught business of trans-national adoption.

A baggage handler unceremoniously dumps a couple of bags onto the ground from the baggage train. In an empty terminal, complete with a white artificial Christmas tree, a middle-aged couple waits alone while a deserted carousel trundles around. Nothing appears.

In an office, a Spanish couple is trying to explain to an airport official in English, a language he doesn’t understand, that their luggage is missing. Welcome to Lithuania!

It isn’t the most propitious start for a journey on which so much hope and expectation have been invested. A childless couple seeking to adopt in a country of which they know little and understand less, at a time of the year when not much happens, wouldn’t seem to bode well.

A large woman named Lila (Laris Kalpokaite) is there to meet them. A gregarious lump dressed in a circa 1960s Stalinist confection, she is the go-between, the mover and shaker, who operates the middle ground between the dreary orphanages, soulless agencies, the judiciary and prospective adopters.

As time goes on it becomes obvious that this is trade like any other. It is based on a network driven by supply and demand and is greased by the dollar and euro. When you add in corruption, poverty, fecklessness, indifference, mutual suspicion and bureaucracy, it makes the whole thing what it is, a largely unedifying experience. Then there is the waiting…

Natalia (Nora Navas) and Daniel (Francesc Garrido) are the would-be adopters. They are a well-to-do couple whose life is incomplete. They want a child. Natalia wants a healthy, blue-eyed, blond boy. What she is offered, at least initially, is anything but. The miserable list of maladies of those whom she and Daniel are presented with is enough to make you weep for humanity: tuberculosis, microcephaly, rickets, paraplegism, blindness and mental retardation… Their demands are reasonable enough. They want a child who, if infirm, has at least a redeemable condition. What they are offered instead is a list of those who aren’t. Of course, you then have to wonder about how supposed civilised societies tolerate orphanages full of children with tuberculosis, rickets and treatable blindness. Carlos, Natalia’s estranged father, a paediatrician, sums it up (via Skype): “Are there no healthy children in that country?”

Fejerman does a good job. This is not a subject of absolutes. It is compromised, morally dubious and unsparing in its search of motive, desire and effect. The film shows how heightened emotions and desire can be trenchant opponents of reality. Sometimes it does this with a laconic absurdity found in situations where the characters don’t know or understand much more than their own part in the process. However, it also shows how big people can be, when the cosmetic or material come face to face with something more important. There is little more important in life than children. They are, after all, and unequivocally, the future. Tempers fray and tears are shed.

When things aren’t going well, Natalia and Daniel project their resentments and unresolved issues on to each other, Lila, the authorities and the country, yet they are strong enough (just) to hold their relationship together. It is touch and go, though. Both Navas and Garrido put in good performances and right to the end it just keeps you hanging on. Can anything worthwhile come out of this sorry mess?